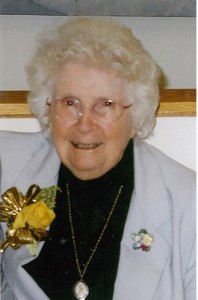 Sister Mary Loyola Engel, C.I.J., formerly Adelaide Frances, a member of the Congregation of the Infant Jesus (Nursing Sisters of the Sick Poor) for 81 years, died Jan. 2 at the motherhouse. She was 104.
She entered the congregation in 1930. As a religious, she graduated from Mary Immaculate Hospital School of Nursing, Jamaica, and provided home nursing to the sick poor for 1934 through 1944. She served as Novice Mistress, 1944-65, and was central to the formation of young women attracted to the congregation.
She was appointed Major Superior of the congregation, 1965-1974, and oversaw changes encouraged by the Second Vatican Council. She also assisted other religious congregations in their post-Vatican II renewal programs, which were recommended by the Council. She was actively involved in the Leadership Conference of Women Religious, formerly the Conference of Major Superiors of Women.
She served on the Board of Mercy Medical Center and worked to initiate the restructuring of the religious community’s home nursing ministry into a new corporation, the Nursing Sisters Home Visiting Service (NSHVS) in 1967. The change enabled the home nursing ministry to become a N.Y.S.-certified home health agency. Through her efforts, NSHVS offered the first pastoral care service in a home health agency.
Sister also authored two books, “Half a Hundred” about the past 50 years of religious life in 2005, and “More Than Meets the Eye,” anecdotal stories about her personal experience in ministries of the congregation.
A Mass of Christian burial was celebrated Jan. 9 at Villa St. Joseph, Rockville Centre. Interment followed at Holy Rood Cemetery, Westbury.

A Mass of Christian burial for John Layden was celebrated Feb. 6 at St. Anthony-St. Alphonsus Church, Greenpoint.
A retired lieutenant from the NYPD, he served with distinction for over 30 years. He was an active member of Kings County AOH Division Six, Greenpoint. Several years ago, he was honored as Kings County Aide to the Grand Marshal of the N.Y.C. St. Patrick’s Day Parade. He is survived by his wife Rita, and their sons Raymond, Bill, Thomas, and John.