Sister Vianney Stewart, R.S.H.M., died Aug. 2 at Marymount Convent, Tarrytown, N.Y. She was 91 and had been a Religious of the Sacred Heart of Mary for 73 years.

She was born Katherine Stewart in Co. Galway, Ireland. 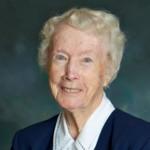 Sister Catherine was a member of the first graduating class at St. Sebastian School, Woodside.

She served in the Brooklyn Diocese as provincial treasurer of the Sisters of Charity – Halifax and as a volunteer at Women Helping Women.

She also ministered at St. Elizabeth parish, Melville, L.I., as well as in Massachusetts, Bermuda and Nova Scotia. She retired to St. Barnabas Convent, Bellmore, L.I., in 2009 and resided there until June, 2013.