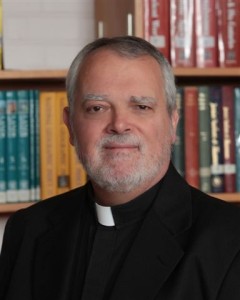 A native of Brooklyn, he attended Cathedral Prep, Brooklyn and Elmhurst; Cathedral College, Douglaston; and Notre Dame Seminary, New Orleans. He was ordained for the Diocese of Lafayette, La., by Bishop Gerard Frey on May 19, 1973.

He served as an administrator and pastor in several parishes in the Diocese of Lafayette. He also served on the Council of Priests, Clergy Personnel Advisory Board and the Bishop’s Development Council.

A Mass of Christian Burial for Rita Keating, mother of Cathedral Club of Brooklyn board member Frank Keating, was celebrated July 29 at Our Lady of Angels Church, Bay Ridge.

Walter G. Lawson, the father of Father Walter G. Lawson, a Claretian Missionary of the Province of Central America, who is presently serving at Our Lady of Sorrows parish, Corona, died July 22 in Panama.

A memorial Mass was celebrated July 30 at Our Lady of Sorrows.

Sister Edith Fondecchia, I.H.M., (formerly known as Sister Editha) of the Sisters, Servants of the Immaculate Heart of Mary, died July 24 at Our Lady of

Peace Residence, Scranton, Pa. She was 86.

Father Charles (Chuck) Gallagher, S.J., 86, a Jesuit for 67 years and a priest for 55 years, died July 21. He was a pioneer and leader in bringing and adapting Marriage Encounter to American couples.

Born in Manhattan, he attended Regis H.S., and in 1945, he entered the Society of Jesus.

He was ordained to the priesthood on June 21, 1958 at the Fordham University Church. His priestly apostolic life focused on retreat ministry and ministry to couples and families. From 1981 until his death, he resided at St. Peter’s University, Jersey City, N.J., though much of his time was spent on the road around the world engaged in Marriage Encounter and Parish Renewal programs.

He is survived by his sister Therese Sweeney of Manhattan. Burial was at the Jesuit cemetery in Auriesville, N.Y.

Former U.S. Ambassador to the Vatican Lindy Boggs, whose career in public service spanned 60 years, including four years in Rome during which she served as a staunch advocate for human trafficking victims, died July 27 at her home in Chevy Chase, Md. She was 97.

Her funeral Mass was scheduled for Aug. 1 in New Orleans at St. Louis Cathedral, where she was an active parishioner.

She served nine terms as the first woman from Louisiana to be elected to Congress. She retired in January, 1991, and in 1997, President Bill Clinton appointed her U.S. ambassador to the Vatican when she was 81 years old. She held the post until 2001.

After learning of her death, New Orleans Archbishop Gregory M. Aymond said, “We thank God for her life of faith and her life of service to the people of Louisiana and beyond.”