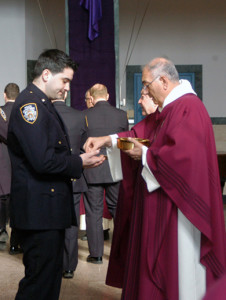 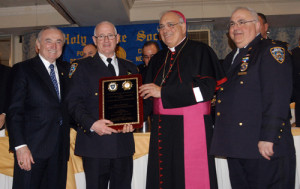 In his homily, the bishop spoke about the theme of temptation in the day’s Scripture readings and noted that Lent is “a time of conversion and reform” and “a time to put God at the center of our lives.”

“The Eucharist is the best thing you can use to resist temptation,” he told the police officers “This is where you must receive your strength.”

New York’s Finest then showed their strength in numbers as they marched a half mile along Springfield Boulevard to Antun’s Restaurant for breakfast and an award ceremony.

In accepting the Man of the Year award, Chief Fox shared one of his favorite quotes: “You can’t live a perfect day until you do something for someone who will never be able to repay you.”

“You get to live ‘a perfect day’ every day,” Chief Fox told his fellow officers, reminding them what an honor and responsibility it is to serve the people of New York City.