PROSPECT HEIGHTS — It was an Ordination Day like no other!

Normally, when new priests are ordained at St. Joseph’s Co-Cathedral, Prospect Heights, the church is filled with more than 1,200 congregants. This year, on June 27, less than 200 specially-invited guests witnessed the ordinations of four men who will serve the Church in Brooklyn and Queens.

“COVID-19 has taken its toll, even on ordinations,” said Bishop Nicholas DiMarzio, referring to the pandemic that has forced suspension of so many day-to-day activities.

There was no outdoor procession, usually led by hundreds of priests. Instead, a small group of 15 bishops, ordinands, and ministers of the liturgy made their way up the center aisle from the back of the church. All wore facial masks.

Gone from the ordination rite were the long lines of clergy imposing hands on the newly ordained and offering them an embrace of welcome and peace. Only Bishop DiMarzio was present at the altar while concelebrants stayed in designated places around the sanctuary. At the point when the Bishop is supposed to offer a sign of peace to the new priests, there was just a simple bow and gesture, no physical contact.

“Everything is in line with proper social distancing. We don’t want a big spectacle,” explained Father John O’Connor, director of diocesan liturgies.

In addition, there was no offertory procession, Mass booklets were not available, and first blessings usually held inside the church following the ceremony were canceled.

Throughout the liturgy, the newly ordained wore their facial masks, only taking them off when they were called upon to make responses to the Bishop. Admittance to the cathedral required facial masks for everyone.

The new priests for the diocese are Fathers Dragan Pušić, 54; Néstor Martínez, 35; Peter Okajima, 59; and Gabriel Agudelo-Perdomo, 58. Two were born in Colombia, one in Croatia, and one in Manhattan of Japanese-American parents. Their average age was 51, making this class of new priests the oldest group that anyone could remember.

Following the Liturgy of the Word, Auxiliary Bishop Raymond Chappetto, Vicar General, called the names of each of the men to be ordained and attested to Bishop DiMarzio that they “had been found worthy” to serve as priests.

They each proclaimed their willingness to serve before Bishop DiMarzio preached an instruction in which he asked them to be signs of unity, to persevere in their vocations, to be joyful priests, and to lead people to live holy lives.

“How important it is that you persevere in your priesthood,” said Bishop DiMarzio, adding that he had ordained 100 priests for diocesan  service. Unfortunately, said the Bishop, some have left active ministry after only a few years.

It was important for the new priests to sometimes separate themselves from things and people “so that we can better relate to the world and everything in it,” said the Bishop as he reminded them that they are called to lead people to eternal life.

“We are destined for eternal life,” Bishop DiMarzio said. “Life does not end with death.”

He pointed out that the new priests face a world that is hostile to religion and he urged them to speak about “spiritual fatherhood and how that is the essence of the priesthood.”

“Our call to the priesthood is so much more important now because there is more hurt and more division in the world,” said Father Okajima.

Bishop DiMarzio also addressed in their native languages the family members and friends who were watching on the live broadcast on NET-TV, thanking them for their assistance in forming the men he was about to ordain.

Following that homily, the ordinands processed to the sanctuary and one by one knelt before the Bishop professing obedience “to me and to my successors.” They then lied prostrate in the sanctuary as the assembly chanted the Litany of the Saints.

The Bishop, who has made religious vocations a priority during his 17-year tenure in Brooklyn, then imposed hands on the heads of each new priest, symbolizing the passing on of priestly ministry. He also anointed each one’s hands with holy oil and symbolically presented them with a chalice and paten.

As the Bishop noted, this was probably the last class of new priests he would ordain since he has already passed the mandatory retirement age for bishops. The Diocese is awaiting Pope Francis’ acceptance of the retirement and the appointment of a new Ordinary for the Diocese of Brooklyn. 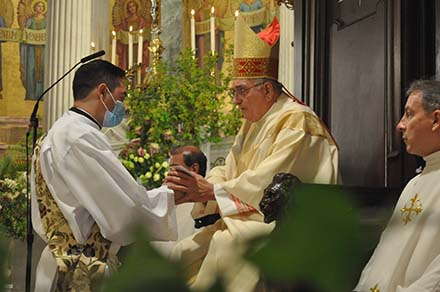 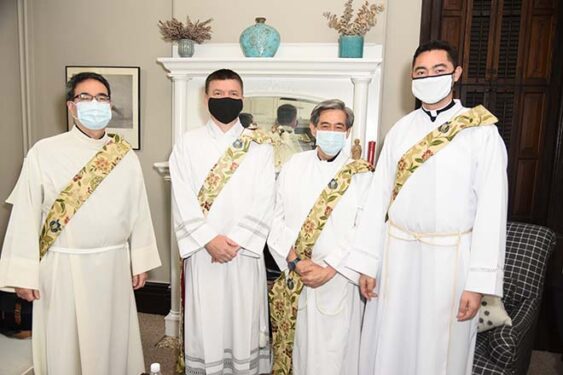 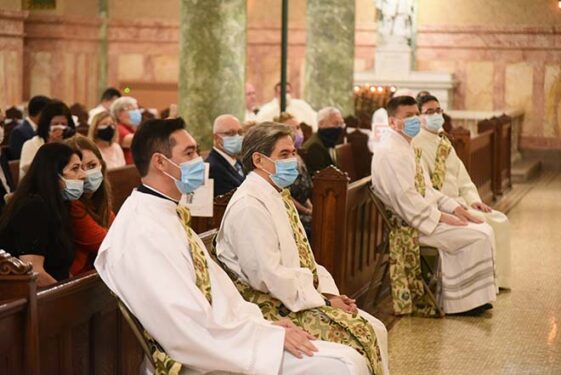 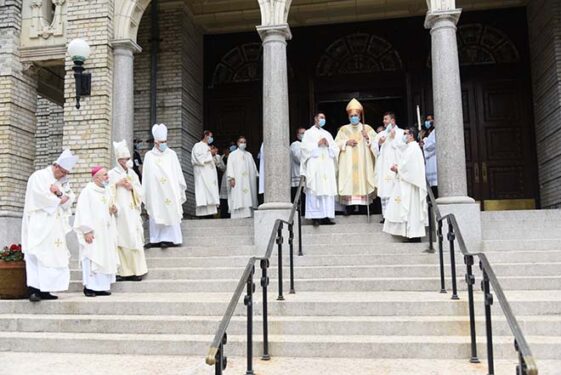 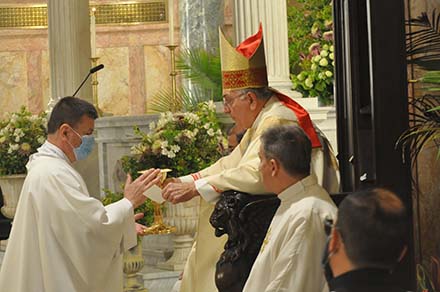