Last month, I had the opportunity to travel with my parents to Ireland, the place of their birth, to celebrate Masses of thanksgiving for my family members who are still living there.

My parents, Martin and Kathleen, were both born in Ireland. At a young age, they left home to come to America, searching for a land of opportunity. At the age of 18, Martin left a small, yet beautiful area of Connemara, County Galway, to travel to England for work. From England, he made his way to New York City.

Similarly, on the east coast of Ireland, County Meath, a woman named Kathleen Clarke left her home, her family and her friends to come to New York City at the young age of 15. They traveled with a sense of uncertainty. They did not know what the future would hold, whether they would ever return home, where they would work or how they would make a living.

Yet with all of these questions still looming over them, they embarked on the journey and settled in New York. It was in Brooklyn that they met one another, fell in love, married and began their family. Martin worked as a carpenter. Kathleen worked as a housemaid for an elderly woman on Park Avenue. 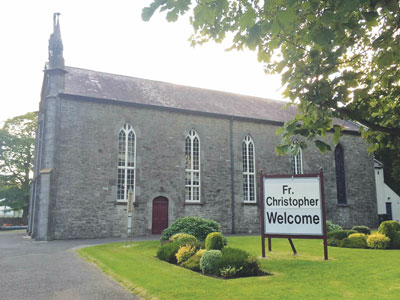 As they began their family, they never lost the faith that was instilled in them as young children growing up in the Catholic society of Ireland. They imparted this faith to their children by having them baptized, by bringing them to Mass every Sunday and by making sure that the sacraments were an essential part of their lives.

They could not have known that 50 years after leaving their homeland, they would return with their youngest son, a priest of Jesus Christ, newly ordained for the Diocese of Brooklyn.

This trip was not about me; it was about them. I had the opportunity to celebrate Mass and to distribute Holy Communion in churches that have meant so much to my parents: the churches in which they received First Holy Communion, the churches from which their parents were buried. During this trip, I could not help but thank God for the gift of my parents and for the faith that they received in their home country.

Irish people are known for their hospitality and they outdid themselves as far as we were concerned. In the Church of the Assumption in Kentstown, County Meath, Father Jim Lynch worked tirelessly to make the occasion tremendously special. He hung large signs welcoming me; he flew both the Irish and American flags outside the church; he asked the choir to sing special hymns; he organized a reception after the Mass at which I could impart my first priestly blessing. In short, Father Lynch treated the occasion as if I were returning to my home parish!

From County Meath, my parents and I traveled to the Shrine of Our Lady of Knock, where I was able to celebrate Mass in the Chapel of the Apparition. Asking our Blessed Mother to intercede for me and to protect my priesthood, I celebrated Mass for a large crowd that just happened to be present.

Finally, we traveled to my father’s town of Clifden, County Galway, where I was able to celebrate a Mass which was broadcast live on local radio for the sick, elderly and homebound.

My experience in Ireland was truly amazing. Watching my parents greet countless people, who thanked them for giving their son to the Church and who praised them for their great faith, made it all worthwhile. Although they left their homeland so many years ago, scared and lonely, they returned knowing that it was all worth it. Never losing their faith, they stayed close to God, trusting that He alone could protect them, guard them and lead them. He continues to lead them in their life’s journey.

I give thanks to God for the gift of my parents, for their strength, courage and trust in God, which sustained in me a vocation to the priesthood.