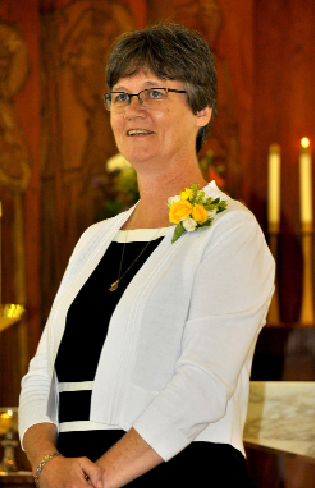 Joan Frances Pikiell made her first profession of religious vows with the School Sisters of Notre Dame (SSND) on Saturday, July 26, at the order’s chapel at Villa Notre Dame in Wilton, Conn.

A native and longtime resident of Bristol, Conn., the 50-year-old woman has spent the past four years deepening her commitment to God in study and service, living with and sharing experiences with School Sisters in Maryland, New York, Illinois, Missouri and Connecticut. As a professed sister, she will daily practice the integration of prayer, community and ministry.

Next month, she will move to Timonium, Md., where she will live in community with three other SSNDs and minister as a middle-school science and math teacher at Mother Seton Academy, a Nativity Miguel model middle school for low-income girls and boys in Baltimore.

Sister Joan has been in the teaching profession for many years. She taught science and technology and religious education to pupils at St. Joseph Catholic School in Bristol. Before that, she held graduate assistant and adjunct faculty positions while working on advanced degrees at Connecticut universities. She worked with college students as director of residence life at St. Anselm College in Manchester, N.H.

Five months of her novitiate were spent in Woodhaven, where she lived with a small group of sisters and engaged in ministry with the women and staff at the SSND Educational Center. The center provides GED, English language and life skills classes to adults, mostly immigrant women.

Sister Joan is the daughter of Mary Faith and Joseph Pikiell, both natives of Bristol and former Catholic school educators.