ELMHURST — Their lives were taken by COVID-19, but thanks to the talents of a teenage artist, their memories live on in a striking new exhibit just a short distance from where so many of them perished.

The Queens COVID Remembrance Day Exhibit, featuring the portraits of 270 borough residents lost in the pandemic, is on display at Queens Public Library’s Elmhurst branch.

The exhibit began on March 1 and it was to conclude at the month’s end, but it is extended through April 30. It coincides with the two-year anniversary of pandemic shutdowns across New York City. This area of Queens, however, is widely known as “ground zero” of COVID-19 deaths, especially high in Elmhurst, Flushing, and Corona.

Each 12-inch-by-18-inch portrait is suspended inside the structural glass reading room at the Elmhurst branch, 86-07 Broadway.

The collaboration of artist Hannah Ernst, 17, the Queens COVID Remembrance Day Committee, and the library’s Queens Memory Project has served to jumpstart the grieving process that the pandemic robbed from families.

Ernst, 17, of Parsippany, New Jersey, began the work at age 15. Two years later, the scope of the portraits has grown far beyond Queens. There are now 2,500 portraits on display on her Facebook and Instagram pages, “Faces of COVID Victims,” which her mother, Karen, helped her create.

The teen said her grandfather, Calvin Schoenfeld, was a Brooklyn native and a commercial artist who inspired her to pursue art. Schoenfeld was 83 when he died of COVID-19 in May 2020.

He became her first COVID portrait, and initially, she had no plans to do more.

“It was a complete accident,” Ernst said. “COVID was still relatively new, and it had just begun to be politicized. People looked at COVID as a joke. I realized that a lot of people will never truly understand the extent of losing someone to COVID.

“So I was hoping through memorializing my grandpa the way I did, they could see him and realize that the statistics on the TV screen were about actual people, not just numbers.”

Ernst’s mother, having lost her father, joined an online support group, to which she shared her daughter’s portrait of him.

“People began to ask, ‘Can I get my own?’ ” Ernst said. “From there we were getting requests all over the country, and then it expanded to all over the world.”

Among them were EmyLou Rodriguez and her sister, Cathy Williams, who asked Ernst to make portraits of their parents. That’s how the artist came to make the other images in the exhibit.

Rodriguez and Williams helped create the Queens COVID Remembrance Day Committee after they lost both parents to the disease within two weeks of each other in 2020.

Antonio “Tony” Solomon, 71, died first on March 26, 2020. Estelita “Estie” Solomon, 72, death followed two weeks later on April 10, Good Friday. However, because they were at different hospitals, both died without knowing each other’s fates.

The Solomons came from the Philippines, but they met in the U.S. and raised their daughters and a son in Queens Village. They were devout Catholics and the family belonged to nearby Our Lady of Lourdes Parish.

The organizing committee came upon the work of Ernst and asked her to draw portraits for Queens COVID Remembrance Day, which was held on May 1, 2021, to help revive the grieving process for loved ones.

Rodriguez said the graveside memorials for her parents were very “stoic and sterile,” because of social distancing requirements. Consequently, the sisters didn’t feel that they properly celebrated their parents’ lives. Their dad had a career in the U.S. Navy; their mother was a nurse.

“So, virtual memorials like [Remembrance Day], at that time, were very important to us, and created a space to grieve together and finally come together.”

Ernst creates these works from photos submitted by families. She draws them with computer software and purposely leaves off facial features. 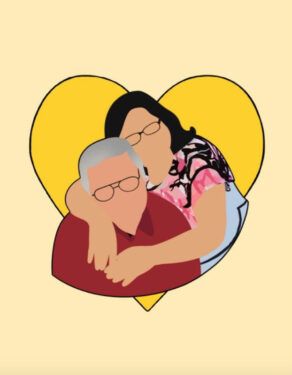 Instead, she focuses on other identifying aspects, like hairstyles, jewelry, eyewear, ball caps, or headscarves.

Without noses, lips, or eyes, the people in the portraits share a thread that joins them into a community, Ernst explained. She plans to keep making them as long as she is asked, even while she’s at college.

The library’s Queens Memory project offers a separate opportunity to memorialize loved ones. Its COVID-19 Project allows people to upload photos and brief biographies onto an interactive website. It also has a map on which people can plot where their loved ones lived.

The site where people’s memorials are shared is: queenslib.org/covid

Rodriguez praised Ernst and the library for the collaboration.

“Our family was just ravaged by COVID,” Rodriguez said. “But our faith community really supported us. Some people lost their faith, but ours strengthened us because of our belief in Jesus Christ and the resurrection.

“We know we’ll be with them again. For now, we’re just trying to keep their memories alive.”