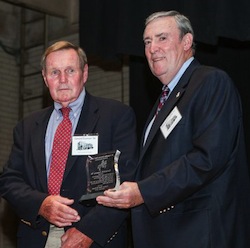 Jerry Gannon came to St. Augustine High School from St. Paul’s Parish in the Cobble Hill section of Brooklyn. At St. Augustine, he competed and starred on the swim team.

After graduation, he attended St. Francis College, Brooklyn Heights, where he competed in water polo. He was varsity co-captain in his junior and senior years and was elected to the St. Francis College Athletic Hall of Fame and also selected as “Alumni Man of the Year” in 1997.

He continued to play after graduation for the New York Athletic Club competing in two Olympic and one Pan American Games trials. He was a member of the 1963 AAU National Championship team. Jerry remained active in the Alumni Association at St. Francis College and served on the board of directors and as its vice president.

Upon graduation, Jerry went on to receive a master’s degree in social work from Fordham University, the Bronx, and began a 40-year career in social services, working in several private family and children’s services agencies. He served as supervisor at St. John’s Home for Boys (Brooklyn), St. Joseph’s Children’s Services and NY Foundling Services (Staten Island).

He also has taught courses in social work as an adjunct professor at St. Joseph’s College Brooklyn, the College of Staten Island and CUNY. In addition, he served as field instructor in the Graduate Schools of Social Service at Fordham, Columbia University, NYU and Adelphi.

Jerry is married to his lovely wife Charline. They have two sons, James and Michael, and two grandchildren. They reside in Good Shepherd Parish in the Marine Park section of Brooklyn, where Jerry has been active with the parish sports committee.

He also remains active as a volunteer for several years at a Franciscan soup kitchen in Park Slope, Brooklyn.

Jerry points out one of his fondest memories of St. Augustine High School was the kindness and support of the Christian Brothers during his father’s terminal illness during senior year and also the dedication of the Brothers who coached the swim team. 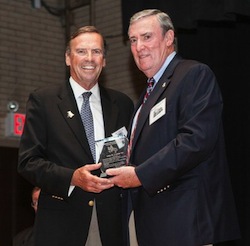 John Cashin came to St. Augustine High School from Our Lady of Angels Parish in Bay Ridge, Brooklyn. After graduating high school, he went to St. Francis College, Brooklyn Heights, and graduated with a BBA in 1968.

He started his working career with IBM selling computers to insurance companies in New York City. IBM had a very generous tuition refund program and received his MBA from City University of New York and his law degree from Fordham Law School. He subsequently received a Master of Laws degree in International Law from NYU Law School.

Until his retirement on April 1, 2014, John was general counsel for the General Insurance Division of Zurich Insurance Group, Zurich, Switzerland. Previously, he served as the group’s chief compliance officer and held several other general counsel roles in Switzerland, the Middle East and Africa. He had joined Zurich in January, 2004 from the Insurance Regulatory Practice Group at the law firm of Stroock & Stroock & Lavan in New York City.

Prior to his law firm practice, he served as deputy superintendent of the New York State Insurance Department. He served as a member of the board of directors of the U.N. Development Corporation and the Jacob K. Javits Convention Center Operating Corporation, which are highlights of his career along with being admitted to the U.S. Supreme Court in 1991 and the U.S. Court of International Trade in 1992.

He currently serves as an inquiry panel member for the Central Bank of Ireland to adjudicate financial services violations by individuals and institutions in Ireland.

John is married to his lovely wife Leslie. They have three children, Nancy, John, and the late Tricia, and five grandchildren. They currently divide their time living in Bermuda and Saratoga Springs, N.Y., and to keep their Brooklyn roots alive, they have an apartment in Park Slope, not far from St. Augustine’s.

John’s fond memories of St. Augustine’s center on the camaraderie of so many classmate friends who came from such similar backgrounds and experience. 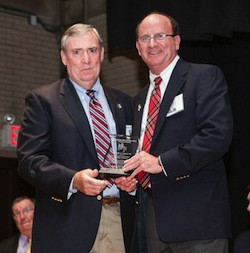 George Geary came to St. Augustine High from St. Michael’s Parish in Sunset Park, Brooklyn. At St. Augustine, he competed in track, cross-country and handball. After graduation, he received a bachelor of sciences in biology from Boston College, Chestnut Hill, Mass.

He was able to join the Massachusetts National Guard Medical Unit in Boston, having been trained as a U.S. Army medic. This gave him the opportunity to begin working in a hospital as a respiratory therapist. After completing a program at Northeastern University, he was appointed director of Respiratory Therapy at Milton Hospital, located a few miles south of Boston.

Shortly thereafter, he moved into hospital administration. He held positions as director of Human Resources and vice president of Clinical Operations at the hospital while completing his MBA from Northeastern University in 1982. In 1985, George was appointed president and CEO of Milton Hospital and served in that capacity for the next 18 years. In 2000, Milton Hospital was identified as the top Massachusetts hospital as rated by patients in a statewide survey. In 2003, after successfully completing a hospital affiliation agreement with Milton Hospital and Beth Israel Deaconess Hospital in Boston, George once again pursued the “patient bedside.”

A desire to give something back for all the blessings he had experienced in his life prompted George to become a nurse. He enrolled at Laboure College in 2004, and in 2006, he earned an RN, graduating as the valedictorian of his class. He practiced critical care nursing in the CCU/ICU at Carney Hospital, a teaching hospital in Boston. In 2008, he accepted a position as a program consultant in Disease Management for BCBS of Massachusetts, where he currently works.

Over the years, George’s recreational interests have included running and mastering the bagpipes. One of his proudest personal accomplishments was completing the Boston Marathon in 1998 at age 51. On the music side, he’s hooked up with some old Brooklyn neighborhood guys from the NYPD Emerald Pipe & Drum Corps on occasion.

He is married to his lovely wife Mary Ellen, a sixth-grade teacher, for the last 37 years. They enjoy spending time at Martha’s Vineyard and visiting nieces, nephews and godchildren throughout New England.

George and his wife presently reside in Milton, Mass. 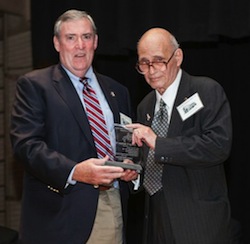 George Sartiano came to St. Augustine High School from St. Teresa of Avila Parish in Prospect Heights, Brooklyn. At St. Augustine, he was co-editor of the Lance, was a member of the yearbook committee, the art club and starred in the senior play, “Three Men on a Horse.”

After completing his internship at Brooklyn Jewish Hospital, he went to the Manhattan VA Hospital for his residency. Before opening a practice in 1964, George took a year of fellowship in hematology/oncology at Memorial Sloan Kettering Hospital. In 1966, he was drafted into the military medical corps during the Vietnam crisis, attached to the U.S. Marines with the rank of captain upon his discharge.

After his military service, he took two more years of fellowship in hematology/oncology at NY Hospital Cornell Medical Center. Upon completion, he accepted a position as an assistant professor at the University of Pittsburgh School of Medicine. He remained in academia for the rest of his career until he retired in 2001.

Dr. Sartiano taught at the University of South Carolina, East Carolina University, Albany Medical School and Wake Forest School of Medicine. During this time, he continued serving our veterans at the Dorn VA, Albany VA and the Hefner VA Hospital, where he was acting chief of staff for Research and Education.

When Dr. Sartiano arrived at Dorn VA Hospital in 1976, the cancer patients were scattered throughout the hospital and had a low survival rate. Through his determination, he was able to acquire an entire floor for oncology, three physicians and a number of oncology nurses. It became the model for the VA Hospital system.

Dr. Sartiano has over one hundred published papers that are still referenced. One of his first published papers was on the clinical trials of antiemetic drugs. Because of his work, oncology patients can get chemotherapy without getting sick.

Dr. Sartiano is married to a Brooklyn colleen, the former Diane Connolly. They have three children, George III, Gregg and Scott. Dr. Sartiano and his wife presently reside in Kannapolis, N.C. 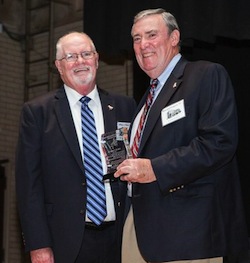 Jeff came to St. Augustine High School from St. Agnes Parish in Downtown Brooklyn. He received his bachelor of sciences in business administration from Kennedy-Western University.

He comes from a family of St. Augustine graduates: his father Jim, his twin brother Matt, his Lancer Hall of Famer uncle Tom and his brother-in-law Anthony.

You might also say that he is from a basketball playing/coaching family including his father, uncle, brothers and himself. You definitely can say that what Jeff O’Brien values is service, direction and guidance to and for young people. His favorite quotation is: Children are our most valued resource.

He started coaching at St. Agnes at the age of 16. He has been coaching boys and girls for over 40 years. He coached on the grammar school level in the Catholic Youth Organization (CYO) and the Brooklyn Children Baseball/Basketball Association (BCBA). He coached the varsity “B” basketball team at Xaverian H.S., Bay Ridge, for six years. He is currently chairman of the CHSAA Varsity “B” Basketball Conference.

He has coached the Fontbonne Hall Academy, Bay Ridge, varsity basketball team. He has served as director of athletics at Xaverian, with the varsity teams winning nine city championships in 12 years.

Jeff has administered and coordinated the activities of baseball, softball and basketball camps for 44 years. He is the president and executive director of the BCBA since it was established in 1984. The BCBA has made basketball available to boys and girls for 30 years.

He was the parish athletic representative for the Our Lady of Angels sports program for 20 years. He has served on the CYO Diocesan Athletic Committee for seven years. He is director and organizer of the BCBA Golf Outing to benefit the “Smiles for Shannon” cancer fund at Sloan-Kettering Memorial Pediatric Cancer Center. Sloan-Kettering Cancer Center has recognized him with a prestigious “2014 Platinum Supporter Award.”

In recognition, the parishes in the BCBA have established the “Jeff O’Brien Scholarship Fund” in his name for his dedicated work.

Jeff has been married to his lovely wife Rhea for 32 years. They have four children and three grandchildren. They reside on Staten Island.[hr]All photos courtesy Tara Zoltek.

One thought on “New Class for St. Augustine Hall of Fame”