They are passionate about doing everything in their power to help others and spread the mission of Jesus Christ throughout the diocese.

However, the two auxiliaries share another passion: baseball, America’s pastime.

From a young age, both bishops developed a love of baseball that has lasted to this day. 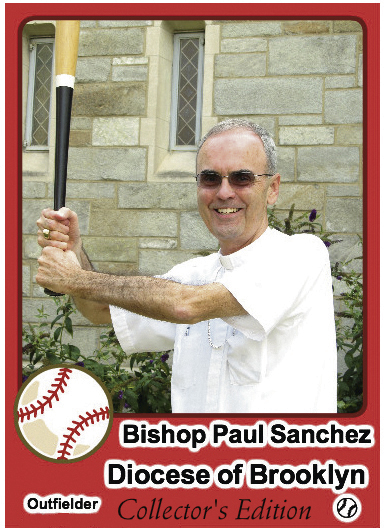 Bishop Sanchez grew up in the Flatbush section of Brooklyn, so East 39th St. between Ave. H and Glenwood Rd. served as his stickball diamond. He and his friends played pick-up games in between the sewers.

“You couldn’t get a full game in because you were constantly waiting for a car to go by,” he said.

He liked the availability of baseball in that he simply walked out his front door and was able to play.

Bishop Sanchez developed a lasting love of the Brooklyn Dodgers, since his family lived just 20 minutes from Ebbets Field in Crown Heights. He used to attend games with his father while in grade school.

His favorite players growing up were Dodgers’ legendary center fielder Duke Snider, shortstop Pee Wee Reese and first baseman and Brooklyn’s own Gil Hodges. He actually got to shake Snider’s hand at the 1964 World’s Fair in Flushing.

He said he didn’t really remember the Dodgers 1955 World Series run, but he does remember the outrage at team owner Walter O’Malley when the Dodgers packed up and moved west to Los Angeles following the 1957 season.

Shifting from stickball to hardball, Bishop Sanchez was an outfielder in local leagues. But as he entered high school at Cathedral Prep Seminary, Brooklyn, he found that he played more pick-up basketball because of his tall stature. He temporarily lost touch with baseball as he focused intently on his studies.

However, in late 1961, MLB executives announced that National League Baseball would be returning to New York in the form of the expansion New York Mets. As Bishop Sanchez began his career as a priest in Queens in the early 1970s, he began following the Mets.

He and some of his altar servers used to take the train to Shea Stadium during his days at Our Lady of Mercy, Forest Hills; St. Michael, Flushing; and St. Sebastian, Woodside. He fondly recalls when the Mets won the 1986 World Series in seven games over the Boston Red Sox.

“I remember the night they won,” he said. “There was a lot of excitement.”

Sadly for Bishop Sanchez and scores of Mets fans, memories of the 1986 season seem eons away based on the team’s recent struggles. Bishop Sanchez still follows the team through TV highlights and the newspapers and even tries to get to a few games every summer, though he said it’s been tough this summer due to his episcopal ordination.

He said he was a fan of former Mets shortstop Jose Reyes the last few years because Reyes was the team’s sparkplug.

“I always enjoyed watching him (Reyes) play because he was so animated,” Bishop Sanchez said. “David Wright I think of as a ‘Steady Eddie’ guy, but Reyes had a special spirit to him. But of course as these things go, everything is about business and they got in that budget crunch, so they had to rework the payroll.”

With Reyes gone, the Mets have had a tough go of it this season. The team got off to a decent start but has faltered in the second half.

“We (the Mets) don’t have the combination of hitting and pitching,” Bishop Sanchez said.

Aside from the Mets, Bishop Sanchez has taken a liking to players who exemplify discipline and sportsmanship while playing the game. He loved watching Baltimore Orioles Hall of Fame shortstop Cal Ripken Jr., who set the MLB record by playing in 2,632 consecutive games.

“I always held him (Ripken) in respect because he seemed to be a faithful player,” Bishop Sanchez said.

While the business aspect of the game has changed since Bishop Sanchez began following the game, he said he enjoys seeing the link between baseball and Catholicism. The ideas of teamwork, community and building relationships are all brought to life on the baseball diamond.

Bishop Sanchez likened the game of baseball to the Latin phrase “Mens sana in corpore sano,” meaning a sound mind in a healthy body. He uses the sport as a release from his laundry list of responsibilities as an auxiliary bishop. 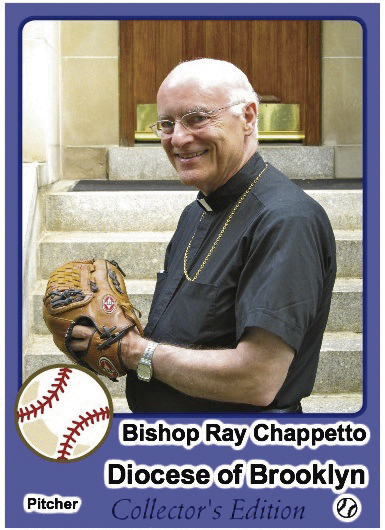 Like Bishop Sanchez, Bishop Chappetto fell in love with baseball and the Brooklyn Dodgers at a young age, but his story is certainly unique.

At age 10, Bishop Chappetto had his tonsils removed. It was October of 1955, so the Dodgers were playing in the World Series.

“In those days, you had to take a week off from school for tonsillectomy,” Bishop Chappetto said. “So I’m home and the World Series is on. I watched every game during the day. I actually fell in love with baseball because of my tonsils.”

Bishop Chappetto’s father and youngest brother were Yankees fans, but he was drawn to the Dodgers. Similar to Bishop Sanchez, his favorite players were of course Duke Snider, Pee Wee Reese and Gil Hodges. He even travelled to Cooperstown in 1980 to see Snider’s induction into the Baseball Hall of Fame. But besides those three, he really liked all the Dodgers’ players.

“Sandy Amoros made that famous catch, Jackie Robinson stealing home…these are plays we are still talking about today,” he said. “I was just beginning my interest at that moment.”

Growing up, Bishop Chappetto played stickball and softball in the Our Lady of Mt. Carmel, Astoria, schoolyard. He was his team’s pitcher and said he really enjoyed playing with his friends.

When the Dodgers moved west in 1957, most fans were devastated. However, the 12-year-old future-Bishop Chappetto stuck by his team and became a Los Angeles Dodgers fan — very rare for a Queens native.

“I didn’t give up on them even though they moved,” he said. “I guess it’s like when you fall in love and somebody moves, you still stay in touch with them.”

Though he couldn’t watch his favorite team in person, he checked the newspapers daily to follow along. He even made sure to visit Shea Stadium whenever the Dodgers came to town for a road trip. He was definitely a loyal fan.

However, in 1986, the Mets took the baseball world by storm. Bishop Chappetto got caught up in the excitement and had a baseball conversion experience.

“It was like an epiphany moment when it dawned on me that something’s not right here,” he said. “We have this team in Queens, and I’m a Queens kid. I wanted to root for a team that was local, and I didn’t want to root for the Yankees. So I went for the Mets.”

He liked the team concept of the ’86 Mets. He thoroughly enjoyed seeing the team win the World Series and appear as if they were turning the corner. However, he said he was disappointed that the team immediately traded World Series MVP Ray Knight, which broke up some of the team’s chemistry.

Through it all, Bishop Chappetto has remained a Mets fan and has adopted the “wait ’til next year” mentality.

He tries to go to a few games each summer and follows the standings and statistics. During the final year of Shea Stadium in 2008, he held a parish fundraiser with Our Lady of Snows, N. Floral Park, where he was pastor, to help with the church’s renovations.

These days, it takes an eternal optimist to be a Mets fan based on financial issues and rebuilding, and Bishop Chappetto fits the bill.

“Like anything else, you have to build from the bottom up, and you have to be patient and hope for the best,” he said. “I always have that hope that someday they’ll come through again.”

While he focuses on the Mets, Bishop Chappetto also believes that baseball provides a stage to emphasize the Catholic value of family life. He said the players can serve as positive role models for children, especially the ones who partake in charity work.

“There’s great value in the sport,” he said.

The Mets will need loyal fans like Bishop Chappetto if they ever plan on returning to their winning ways.

2 thoughts on “New Auxiliaries Share Love of the Game”