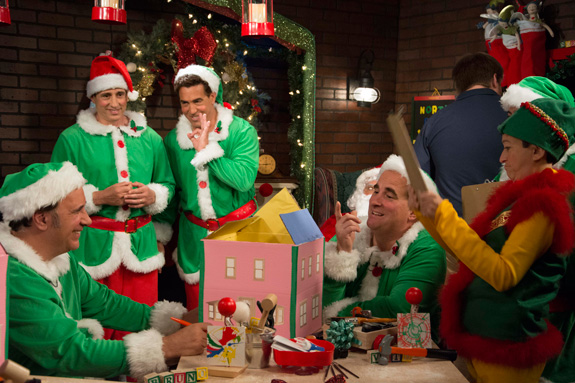 The NET’s Christmas Variety Special, which premiers this weekend, is must-see family entertainment. Combining hilarious skits and holiday music, its cast reads like a Who’s Who of Brooklyn TV talent.

Host for the one-hour entertainment show is Anthony Mangano, who hosts City of Churches on NET, but you also might recognize him from his roles on Person of Interest, NYPD Blue, Castle, and Blue Bloods. He’ll also be appearing in the upcoming Steven Spielberg series Public Morals.

On the Christmas special, Mangano teams up with Joe Manno, from the Emmy Award winning CBS special All in One, as they perform holiday skits in the tradition of Martin and Lewis with a hint of Abbot and Costello.

If you remember the Andy Williams or Perry Como Christmas specials from years past, you’ve got the inspiration for this creative venture from NET.

You will also recognize in cameo appearances Lenny Venito, from ABC’s The Neighbors; Lou Martini, Jr., The Sopranos; Jimmy Palumbo, Boardwalk Empire; and Joe D’Onofrio, Are We There Yet?

You will delight in the performance of Mario Bosco from Jimmy Kimmel Live, who plays the role of Santa’s elf. More about Mario in an upcoming column and also on NET’s hit series Portraits of Faith.

What would a Christmas special be without some Christmas carols? Enter former NYPD officer Danny Rodriguez, one of the New York Tenors, and Stephanie Hanvey, a finalist on American Idol. Special treat comes when Nicole Mangano teams up with her dad for a duet. This continues a family tradition. Anthony’s dad was 1950s nightclub entertainer Tony Mann.

A dramatic finale taped on the steps of Holy Name Church, Park Slope, includes a Danny Rodriguez solo as well as accompaniment by the entire staff of DeSales Media Group, the parent company for The Tablet and NET-TV.

The delightful script was written by Mangano and Manno with an assist from the creative hand of Lou Miano, who doubles as the producer. Lorenzo Regalado directs. Executive producer is Craig Tubiolo, who directs NET’s programming.

The show features some merry mayhem from a zany visit from a singing house painter, an elf who wrecks the halls of the North Pole and one family’s hilarious adventure picking out their Christmas tree. Of course, Santa also pays a visit.

Filmed entirely in Brooklyn with an all-Brooklyn cast, the special will premiere on Saturday, Dec. 20, at 8 p.m. It will be repeated twice a day until Jan. 4. Check the NET-TV guide printed each week in The Tablet.

NET can be seen on Time Warner’s Ch. 97 and Cablevision’s Ch. 30 in all NYC boroughs except the Bronx. It can also be viewed on FiOS on demand in major cities across the U.S. and online at netny.tv/watch-now/.