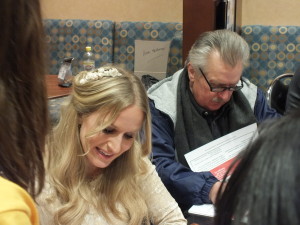 NET TV, in association with Riverhorse Entertainment, traveled to the March for Life in Washington, D.C., to sponsor free screenings of the Vatican-endorsed film, “Doonby.” Actors from the film, Jenn Gotzon and Joe Estevez, pictured above, attended the screenings and rally. Though the film doesn’t consider itself a pro-life movie, it offers a strong argument to the fragile and delicate nature of preserving every human life. Two screenings were sponsored by NET TV. The first was held on the eve of the march at the E. Street Cinema, while a second, more intimate screening took place the day after the march and was attended by a youth group brought by the Sisters of Life. Each screening proved to be a success as many people attending the film were moved by its strong message. Afterwards guests, and all of the kids, were treated to a question-and-answer session with actors, as well as director Peter Mackenzie, followed by photo opportunities with the cast and autograph signings.