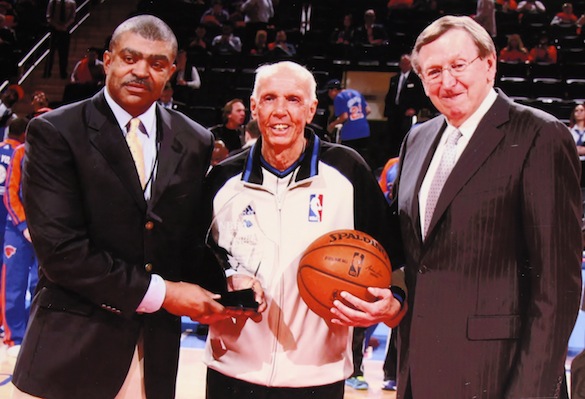 For the first time in 39 years this fall, the NBA will be without an icon.

Longtime referee Dick Bavetta, a native of Park Slope, announced his retirement Aug. 19. The 74-year-old legend retires with the most games officiated as an NBA referee at 2,635.

What’s most impressive about his career is the fact that these games were officiated on a consecutive basis. Since he debuted in the NBA at Madison Square Garden on Dec. 2, 1975, Bavetta never missed an assigned regular season game – or an exhibition, playoff or finals game for that matter. 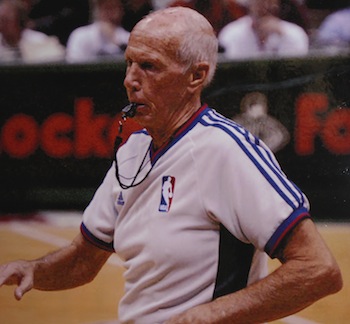 Bavetta said he’s been overwhelmed by the positive comments he’s received from former players, coaches, officials, fans and even a mascot and public address announcer, thanking him for his dedicated service.

He said he felt that the timing of the announcement is right, since the humble referee has accomplished so much in the NBA.

“Most people at 74 years old aren’t even working let alone running up and down the court,” Bavetta said. “It’s just time to walk away and look back with a smile on my face and be thankful for what I’ve accomplished and just be grateful.”

This past April 2, Bavetta worked his 2,633rd consecutive game, fittingly at Madison Square Garden where it all started 39 years ago. That number should ring a bell for sports fans since it’s one more than legendary Baltimore Orioles’ shortstop Cal Ripken Jr.’s famous “Iron Man” streak of 2,632 consecutive games played. It’s no wonder why Bavetta has been called the “Cal Ripken Jr. of referees.”

In 1966, he started officiating in the CYO for $5 a game. Over the next nine years, he called games in the Catholic and public high school leagues of New York City and the Eastern Professional Basketball League before beginning his 39-year stint as an NBA referee.

On Feb. 9, 2006, Bavetta set the record for most games officiated by an NBA referee at 2,135, with the previous mark held by Jake O’Donnell. He’s been inducted into the CHSAA Hall of Fame, the New York City Basketball Hall of Fame and most recently the Basketball Old-Timers of America Hall of Fame this past May.

Throughout his journey, Bavetta always kept himself in prime physical shape to be able to endure the physical and mental stresses of an NBA season. He would run 5 to 8 miles per day and then take a three-hour power nap so he would be refreshed by game-time.

But even more so than his physical conditioning, Bavetta credits his longevity to his devout Catholic faith. 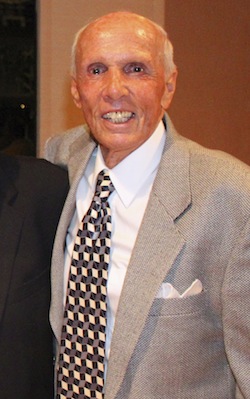 “Whatever I’ve accomplished is because of our Lord and Savior Jesus Christ,” Bavetta said. “He has blessed me with good health beyond what anyone can wish for all these 39 years (as an NBA referee) and these 74 years of my life. There’s a peacefulness that He has given me that now would be the time.”

Bavetta said there were a few times this past NBA season that he got down on his hands and knees in his hotel room to ask the Lord for His blessing to help him get to the next game. Before breaking the “Iron Man” record in April, he went to Mass at St. Patrick’s Cathedral in Manhattan to offer up thanks for a lifetime of blessings.

“Sometimes I just pinch myself and wonder how I’ve been able to affect other people’s lives just by going about my normal routine,” he said. “I’m very, very blessed to have touched a lot of people’s lives, just how they have touched my life over the years.”

Though he’ll no longer be officiating games, those blessings will continue, as Bavetta intends to spend more time with his family on his ranch in Ocala, Fla. He’s also already enrolled in Spanish classes in a local junior college and will even be taking guitar and piano lessons to honor his family’s musical background. His father was a concert violinist, and his grandfather taught stringed instruments in a music studio that he set up on the top floor of the family’s brownstone on 8th Street in Park Slope.

If Bavetta dedicates himself to these new endeavors like he did his 48-year career as a referee, it wouldn’t surprise anyone if he winds up writing and conducting beautiful Spanish concertos.

However, he did point out that he might need some additional time to adjust to the new change.

“This October will be the first time in 49 years that I’m not going out on a basketball court to referee a game,” he said. “That’s when I’ll probably find out how I’m dealing with things.”

He even said, facetiously of course, that he might flip through the yellow pages to find out about any opportunities to officiate games this fall.

If there just so happens to be any CYO or recreational hoops leagues in the Ocala area looking for an experienced basketball official, Bavetta’s résumé speaks for itself.[hr]Contact Jim Mancari via email at jmancari@desalesmedia.org.[hr]