We all know the Bible story of Samson and Delilah. In Judges 16, the mighty Samson lost his God-given strength when Delilah snuck into his room and had his hair cut off.

She exploited Samson’s weakness, but how would Delilah have fared against two powerful Samsons?

The dream began across the Atlantic Ocean in Nigeria. Usilo was born and raised in Delta State, while Akilo’s family hails from Lagos – six hours away from Usilo. The two were roommates at a basketball camp, but they didn’t think anything of it and went their separate ways after the camp ended. 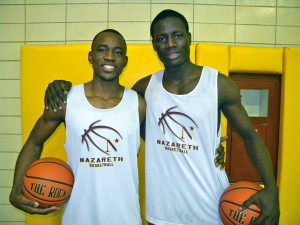 Through a link with Nazareth’s girls’ basketball team, Usilo was informed about the high school and decided to enroll as a sophomore in the fall of 2011. Todd Jamison, head coach of the Kingsmen, had no idea of the talent he had just received.

“Samson Usilo walked through the door his sophomore year,” Jamison said. “I didn’t know anything about him. During the first day when we had open gym, I had to go out into the lobby and pinch myself.”

Sure enough, Jamison received a call that another Nigerian player, Akilo, wanted to play at Nazareth. What a coincidence that two players that had been roommates at a Nigerian basketball camp would now be teammates at Nazareth.

Akilo came over a bit later than Usilo, so the towering forward had to sit out his sophomore season. Led by Usilo, Nazareth went on to capture the 2012 CHSAA Class ‘B’ state basketball title.

Last year as juniors was the first time Usilo and Akilo played together, and the chemistry between the duo was obvious. Nazareth moved up to Class ‘A’ and was still able to capture the 2013 state title.

Adjusting to life in New York City took time for Usilo and Akilo. Both live with foster families – Usilo in Staten Island and Akilo in the Bronx – so commuting to school each day takes nearly two hours each way.

Just trying to learn English was a challenge, and being so far away from their families at such a young age was also difficult. But soon after they arrived, they both began to feel very much at home.

“I’m thankful that I came to a good family,” Akilo said. “Everybody at Nazareth, my classmates, my teachers, the principal (Providencia Quiles), my coach (Jamison) … they have been good to me.”

“It really took a lot of courage,” Usilo said. “Everyone was so encouraging that it made it easier for us to adjust quickly.”

Heading into the summer before senior year, Usilo had already received several scholarship offers from schools other than Manhattan, such as Hofstra University, Quinnipiac University, Michigan State University and West Virginia University.

Since Manhattan had been courting Usilo intensely, the Jaspers’ coaches also got to see Akilo play consistently. While Usilo is more of a shooter and scorer on the offensive end, Akilo prides himself in his shutdown defense and rebounding ability.

Usilo waited patiently, though the Manhattan coaches really wanted a decision. At an Amateur Athletic Union tournament this summer, LIU Brooklyn and Manhattan both offered Akilo a scholarship, so there was some hope that the duo would remain together.

“The reason I kept waiting was because I wanted to see where he (Akilo) was going,” Usilo said. “I wanted to make sure that he was set before I chose. I take him as a brother.”

Both wanted to stay close to New York City and were intrigued by the academic programs at Manhattan – Usilo for engineering and Akilo for business administration. They also liked the small-school atmosphere similar to what they have experienced at Nazareth.

“We came to Nazareth by the help of God, and with our coaches, we are trying to make things happen,” Akilo said. “We figured that we can stay together with a good attitude and make things happen at Manhattan College for the next couple of years.” 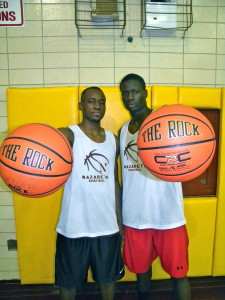 Even more so than basketball, Usilo and Akilo are excited for their academic opportunity. The lengthy commutes have allowed them ample time to complete their schoolwork, and it’s led to success in the classroom, with Usilo maintaining a 96 average and Akilo a 91.

Next fall will bring plenty of new and exciting opportunities for Usilo and Akilo, but right now they are solely focused on finishing their basketball careers at Nazareth on a high note. Being two-time defending state champions, they realize that the team has a target on its back. The Kingsmen appear ready for any challenge and have their sights set on capturing a state federation title.

As for Coach Jamison, he of course would rather not see these two players leave his program, but he’s extremely proud with the progress they have made. He was an integral part in turning two basketball players with raw ability into smart and savvy college-bound student-athletes.

“These guys (Usilo and Akilo) have such high character, and more than anything, that’s what I’m going to miss,” Jamison said. “Somehow, some way, somewhere, we have to replace not only their talent but also their character.”

The journey of the two Samsons at Nazareth is a prime example of the experiences of two young men coming full circle. From having the same first name, to being roommates at basketball camp in Nigeria, to emigrating to play basketball at the same Brooklyn high school, to now continuing their education in college – where they very well could be roommates again – there couldn’t be a better script.

Akilo summed it up well: “We have been destined to be together.”

That journey right now has only one unfinished chapter: Usilo and Akilo leading Nazareth to a third straight CHSAA state title. Before they become Jaspers, they want to finish strong as Kingsmen.