In an interview with The Tablet, Bishop Michael Olson of Forth Worth, Texas, the host diocese of V Encuentro, said: “I say this trepidatiously as the bishop of a diocese where 55 percent of a million Catholics are Hispanic. The Hispanic reality is multigenerational. There is a larger and larger percentage that is predominantly English speaking. So the issue is not predominantly about language and is not even predominantly about culture. It is about family and it’s about the Church.” 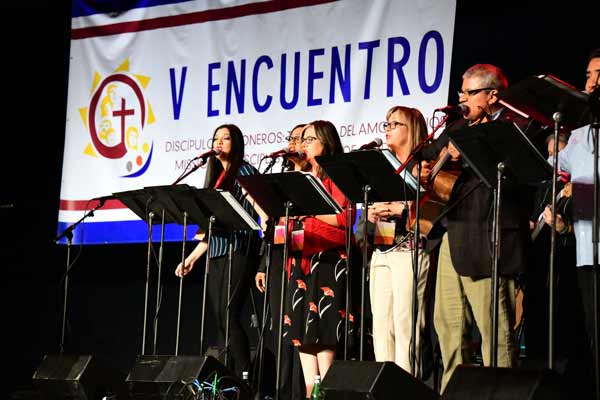 This represents a new challenge for the Church in the U.S. and for the Hispanic Catholics themselves. Having Spanish-speaking priests, Spanish Masses and publications continues to be essential to welcome the recent immigrants. But what are the effects of keeping them separated from the surrounding English-speaking community? And how can their English-speaking children integrate to the Church at large without losing their roots?

It takes longer today to integrate immigrants into the communities that have welcomed them. Their children, on the other hand, learn the language of the land and the ways of the new culture—and many times that means leaving the Catholic Church, losing their Catholic faith. The Church and Hispanic families are still trying to find ways to integrate the second, English-dominant generation into the community.

“We need to be flexible,” says Mari Fernández, a delegate from Brooklyn to V Encuentro. “My kids speak both languages but they are more comfortable in English. So when I invite them to go to Mass, is to an English Mass. I might go to a Spanish Mass later, but I think it is important to help them participate in the Mass.”

Sometimes Spanish speaking Latinos remain isolated in their small circle in the parish. And that is one of the key reasons why they are scarcely represented among the leaders of the Catholic community at the local and national levels.

“One of the problems that historically has affected us is the language,” Archbishop José Gómez of Los Angeles said. “If people don’t speak the same language, communication becomes a problem, but now our young people speak English as their first language, and that is going to be a reality pretty soon,” Archbishop Gómez said in a press conference during the Encuentro.

‘Don’t Have a Significant Presence’

“Latinos don’t have a significant presence among the leadership in parishes, dioceses or in the Bishops Conference,” he added. “I think it is very important that more and more Latinos assume leadership positions in the Church, not just in the ‘administrative’ realm but in the life of the Church.”

Asked about the importance of speaking a common language in the Church, he said: “It is really essential for the future of the Church in the US. We are supposed to come together. We have different cultures, different family traditions, but I think as a Church we need to come together and be one.”

There is, of course, a price to pay to achieve that goal. The integration of such a diverse flock into one community involves sacrifices from all the ethnic or language groups in the Catholic Church in America. There is a reluctance to talk about some of the sacrifices the process requires.

“Each one of us is the problem. Unity requires conversion,” Bishop Olson said. “We have to be willing to be inconvenienced for the sake of unity. On the one hand that those who are speaking English have to be willing to listen to another group; but it also means that in the Spanish-speaking community there has to be a willingness to let go also of things that they hold dear.”

Focused on the very real challenges their community faces, Latinos sometimes remained oblivious to the other communities in the Catholic Church in America. It is a mentality that has to be changed to achieve full participation in the Church at large. According to Archbishop Gómez, “Latinos [should] open up to other communities’ reality — the Anglo community, the African American community, Filipino, Vietnamese. We Latinos need to develop better communications with all these communities,” Archbishop Gómez said. “In a certain way it could be easy because the young people already live in that way.”

During his press conference at V Encuentro, Archbishop Gómez even suggested changing the word “Encuentro” on the crosses they will send to the parishes. “Using the word Encuentro, for many people it means that it is only for Hispanics. I hope we could find another word that can invite all people to come because it is a beautiful experience.”

A Change in Mentality

Sometimes Latinos see their lack of access to leadership positions as a result of the ingrained unfairness of the structures in place in society and in the Church. This mentality tends to make people focus on demands and vindications more than on specific plans to solve their problems by themselves.

In this National Encuentro delegates often talked about the recognition Latinos deserve and the roles that should be given to them based on their significant numbers. There have been also calls for “more adequate budgets” for Hispanic ministries.

Those valid demands sometimes seem to be based on the idea that others have the power and the responsibility to solve the problems affecting the Latino community. But among leaders of the Hispanic community another vision is emerging.

For them Latinos are not passive spectators that should wait for others to give them what they deserve but active protagonists capable of proposing ideas and implementing solutions not just for the Hispanic community but for the Church at large. It is a less complacent view of their reality. It includes not just what the Latinos deserve but what the community should do to make it happen.

In an interview during the Encuentro, Sister Norma Pimentel, the director of Catholic Charities in the Diocese of Brownsville, Texas, says: “I think that the time is now—we must help and we must acknowledge our responsibility to take action. Now as people of God we must speak up and we must take action and not just sit back in the pews and let others do. We can’t just complain—we must take action and say ‘I have a voice and I must use that voice to speak up.’ I am very hopeful Encuentro get help us take responsibility for that.”

Sister Norma talks from personal experience. She has been the driving force behind the efforts Catholic Charities have undertaken in her frontier diocese to help undocumented immigrants detained by ICE in McAllen. Her program has gained national recognition and it has helped define the vision of the Catholic Church in the United States about the ongoing border crisis.

Lesson for the Whole Church

In an interview with The Tablet, Bishop Daniel Flores of Brownsville, pointed out how the Hispanic community’s experience with migration could be a lesson for the whole Catholic Church in the United States.

“We have ideas to propose, experiences to propose […] because migration is also a reality within the country, not just from another country. People move and they take their experiences with them to the parishes they go to. There is a lot of ideas about how to do catechesis, how to accompany people in troubling situations, about how to keep families together. One of the things that we have as a gift to the whole Church is how our families need to stay connected,” he said.

Asked about the essence of this National Encuentro, the bishop said: “It’s about the whole mission of the Church and not one community or another. It’s strengthening our roots so we can be of service to everybody else.”

One thought on “National Encuentro Is About the Whole Church”