CARROLL GARDENS — Now that more than 50 years have passed, Bill Gorman has to dig deep for memories of classmate Victor Grant, who died in 1967 at age 15.

Gorman is a lifelong member of historic St. Agnes Parish in Carroll Gardens. In the mid-1960s, he and Victor were among 1,000 students taught by the Sisters of St. Joseph at St. Agnes Catholic School, across the street from the church which is now part of St. Paul-St. Agnes Parish.

Victor tragically drowned during summer camp. Gorman, now a retired teacher, remembers how distraught Victor’s mother was and how the nuns consoled her.

In appreciation, Mrs. Grant purchased a statue of Mary for their convent next to the school on Degraw Street. It included an inscription at the base: “In Memory of Victor Grant, 1951-1967.”

But the tiny shrine disappeared after the nuns moved from the building and the parish rented it to St. Vincent Services. That bothered Gorman, who spent the next 40 years looking for the statue.

“I got married, raised four kids, and went to work, so it wasn’t like it was on my mind every day,” Gorman said. “But certainly, it was something that always ate at me.

“Mostly, it was more for Mrs. Grant because the woman thought she had memorialized her only child for posterity.”

Little information exists about the life of Victor Grant. But, unfortunately, a news brief about his death is exactly that — brief. 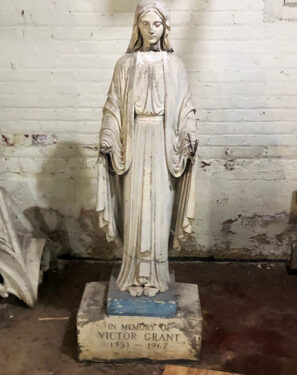 Victor came from one of the three African American families that belonged to St. Agnes Parish in the mid-1960s, according to Gorman. The Grant family lived at the Gowanus Houses, a public housing project that opened in 1948.

Both Gorman and Grant were altar boys.

“He was bright, quiet, athletic — he certainly wasn’t a smart aleck, that’s for sure,” Gorman said of Clark, who was one year older. “But the shock of his death had people thinking that because he was so athletic, how could he have drowned? I don’t know what the circumstances were.”

Gorman said that Mrs. Grant’s husband did not attend church, and the couple split up after Victor’s death. The Sisters of St. Joseph ministered to her.

According to Gorman, Sister Helen Bernard Flanagan was the principal at the time, and Sister Mariel Riordan was especially close to Mrs. Grant.

“It started with them going through the whole process of helping her plan the funeral,” Gorman said. “Then they helped her get to where she could have a life for herself.

“I don’t know if she worked before, but she certainly worked afterward. She got a car. She got a license. The sisters were instrumental in all that, trying to get her to build up her freedom.”

The statue she bought for them was the first thing they saw when exiting the convent from a side door. After that, the shrine became known to the neighborhood because it was just a few feet from Degraw Street.

When a neighborhood woman saw it for the first time from her upper-floor brownstone apartment window, she thought it was an apparition, Gorman recalled with a chuckle.

The school closed in the 1980s, and the number of sisters dwindled. The parish bought a row house on Sackett St. for the remaining four nuns. The convent became a rental property occupied by St. Vincent’s Services for many years.

Sometime early in that process, the statue disappeared. Gorman, always active in parish activities, questioned pastors about where it went, but nobody seemed to know.

“And, because it was rented out, nobody wanted to go into the building,” he said.

Gorman retired last year from Xaverian High School, where he taught history for 30 years. Meanwhile, the parish sold the convent two months ago to a developer who is converting it into condos.

With the building vacant, Gorman and Father Alex Morard got permission to go inside and look for the statue. They found it in a far corner of the expansive basement.

For Gorman, excitement quickly turned into sadness. His stomach sank when he saw the statue had fallen into disrepair. Cracks covered its surface, and the hands were missing.

Still, Father Morard and Father Paul Anel, the pastor, were moved by Gorman’s quest. They pledged to salvage the memory of Victor Grant and his mother’s devotion.

“It is impossible to fix it,” Father Morard said. “So we want to purchase one that is the same shape and in the same position. We are asking for quotes and prices.”

The west side of the church facing Hoyt Street is where the new statue will go as part of a garden devoted to Mary.

But as before, the new statue’s inscription will honor Victor and include a note about his mother, Father Morard said.

“We will do something nicer,” he said, “with marble, maybe, or maybe we’ll have bronze or brass. We’ll see.”

The memorial will be a small confirmation of the Grant family’s existence. Still, Gorman is pleased that Mrs. Grant’s love for her only child, and the sisters’ devotion to her, won’t be hidden in a basement.

“It’s a good feeling to know her hopes will once again be respected,” he said.

Send a check with
“Victor Grant Statue”
in the memo to:

2 thoughts on “Mystery Solved: Parish to Salvage Mother’s Memorial to Her Child”