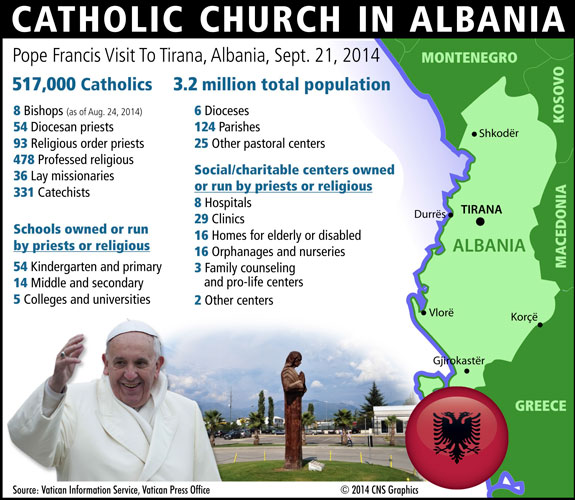 VATICAN CITY (CNS) – Pope Francis’ choice of Albania as the destination of his first international trip in Europe reflects his trademark pastoral approach: Head to the peripheries, bring healing to the suffering.

But his Sept. 21 visit to the poor, Muslim-majority nation also will highlight, to a world increasingly torn apart by sectarian strife, a hopeful example of Muslims and Christians living in harmony.

“The presence of the pope will say to the people, ‘See you can work together,’” Pope Francis told reporters last month, praising the Albanian government’s efforts to promote interreligious cooperation.

“The pope values this, wants to show Albania as an example and encourage it,” said Father Gjergj Meta, media coordinator for the Archdiocese of Tirana-Durres.

Catholics make up only about 16 percent of Albania’s 3 million inhabitants; about 65 percent are Muslim and 20 percent Orthodox.

Yet Muslims, Orthodox Christians and even people of no faith “see the pope as a charismatic person who defends the weak and the voiceless,” Father Meta said.

Luigj Mila, secretary-general of the Albanian bishops’ peace and justice commission, said he expects a large number of Muslims to welcome the pope.

Starting with the Ottoman incursions in the 14th century, “we’ve been occupied for so many centuries, we stuck together to survive,” he said. “We always worked together.”

Starting in 1944, Stalinist dictator Enver Hoxha sought to cleanse the country of all religion, even passing a 1967 constitutional law that banned any trace of the divine, which made Albania the first and so-far only atheist nation.

“He wanted to be god for Albanians,” Mila said.

Catholics were disproportionally targeted, he said, because “they had been warning about the dangers of communism.”

Almost all of Albania’s fewer than 200 priests were jailed and scores killed. Countless laypeople and religious faced arrest, torture, firing squads, concentration camps and forced labor, while thousands of places of worship were confiscated and demolished or turned into movie theaters, gyms and meeting halls.

Though Catholics passed down their beliefs in secret, they had no religious structures or institutions to help pick up the pieces once the communist dictatorship dissolved in the early 1990s.

That’s what made St. John Paul II’s visit in 1993 so important to the then-newly democratic nation.

Albanians saw the Polish pope as a vision of hope, “a prophet bringing good news to everyone,” upholding the freedom of conscience and human dignity, said Albert P. Nikolla, coordinator in Albania of the papal trip and head of Caritas Albania.

Two decades later, Albania enjoys religious freedom but still grapples with corruption, a lack of infrastructure and an ancient vigilante code in the North that affects thousands of families, many of them Catholics. Called “blood feuds,” the traditional Albanian code sanctions the killing and threats to kill others as revenge for murder.

The country is also one of the poorest in Europe, with 17 percent unemployment and 14 percent of its people living below the poverty line, a situation that has spurred large-scale emigration.

“People are free, but they’re not happy,” Father Meta said.

Caritas Albania tries to fill in the gaps and is “the largest charitable organization” in the country, helping some 80,000 people every year, Nikolla said. The pope’s afternoon visit to Tirana’s Bethany Center to meet children in its care will highlight the church’s help to the needy across Albania.

The biggest challenge for the church in Albania today, Father Meta said, is meeting people’s social, psychological and spiritual needs. One-on-one dialogue, trying to “understand the human person, listen to what they are going through and see their heart” needs to be the priority in these situations, he said.

Before the church can be an effective teacher of the faith, it “has to be a force that heals,” the priest said, in words that recalled Pope Francis’ description of the church as a “field hospital after battle.”

When St. John Paul became the first pope to go to Albania, “it was like the good Samaritan. It was an evangelical moment,” Father Meta said. It was “a dramatically wounded church, and the pope was like the man who reached out his hand and said, ‘Arise.’”

Today Albania is again found languishing on the roadside – wounded not by persecution but by the post-communist afflictions of isolation and social instability.

Pope Francis’ visit falls on the feast of St. Matthew, a day of enormous significance for the pope, who, as a 17-year-old boy, strongly felt God’s presence and mercy, inspiring him to religious life.

His episcopal and papal motto – “Because he saw him through the eyes of mercy and chose him” – is based on the account of Jesus seeing Matthew, a sinner and tax collector, and calling him to “Follow me.”

“Just as God looked on him, a sinner, we are a country upon whom the pope has looked,” seeing Albania through his own eyes of mercy and choosing it for great things.