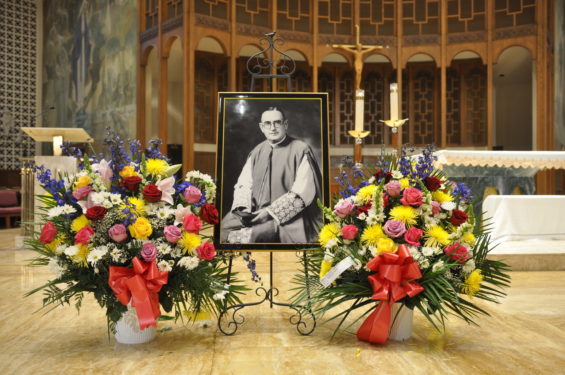 A portrait of Msgr. Bernard Quinn sits in the sanctuary of the chapel at Immaculate Conception Center, Douglaston, during vespers service completing the diocesan phase of the investigation into his sainthood cause. 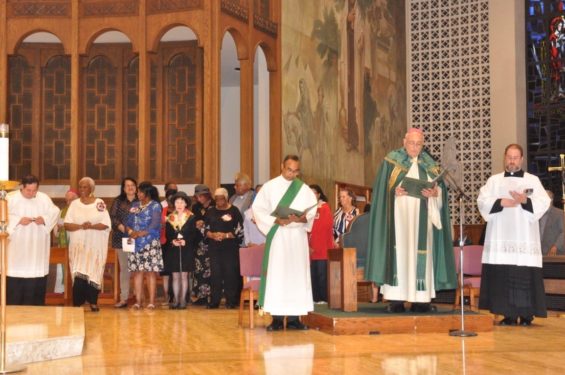 Bishop Nicholas DiMarzio presided at a vespers service in Douglaston as the diocese takes the next step in what it hopes will be the canonization of Msgr. Bernard Quinn. 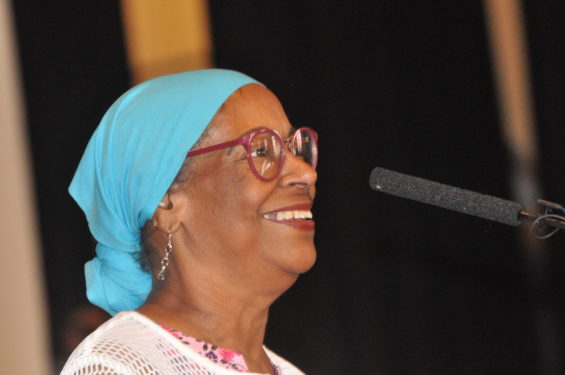 Donna Grimes, assistant director for African-American Affairs for the U.S. Conference of Catholic Bishops, spoke about the bishops’ 2018 pastoral letter, “Open Wide Our Hearts,” which deals with racism in American society. 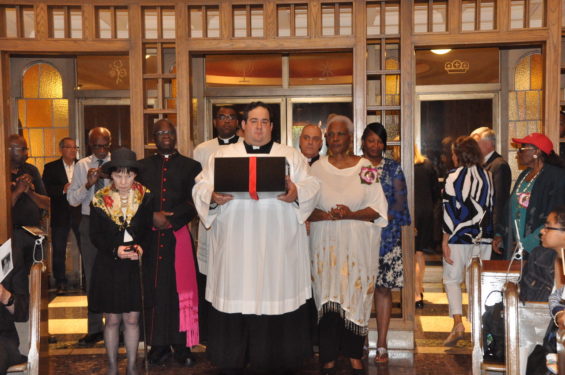 Father Michael Bruno is joined by Msgr. Paul Jervis and members of the Msgr. Quinn Guild as they prepare to present to Bishop DiMarzio the results of the diocesan investigation into the sainthood cause for Msgr. Quinn. 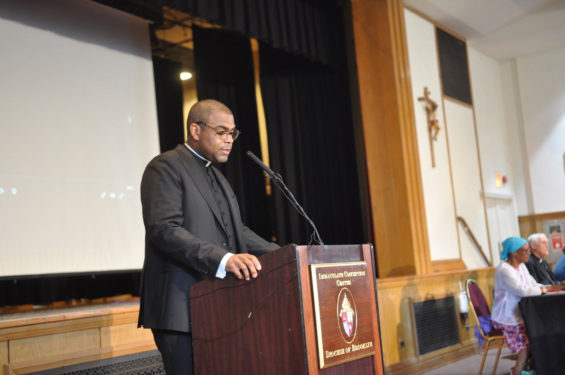 Father Alonzo Cox speaks during a forum on racism with diocesan priests in Douglaston. 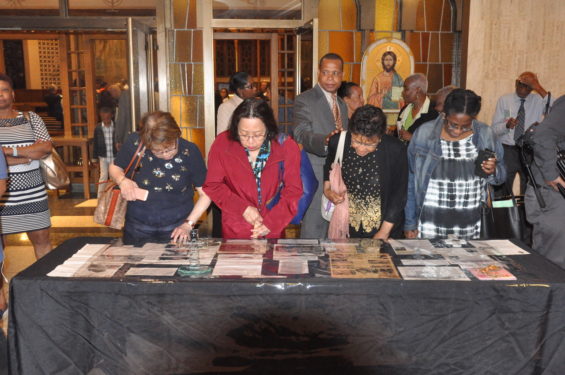 Devotees of Msgr. Bernard Quinn look over some of the press clippings from the beloved Brookyn pastor’s life.

The documentation supporting the sainthood cause of Brooklyn’s Msgr. Bernard Quinn is now on its way to Vatican City.

Bishop Nicholas DiMarzio applied the diocesan seal to a black box with a red ribbon containing the official papers at a vespers service conducted June 18 at the chapel of Immaculate Conception Center, Douglaston.

Included are testimonies from local people about the virtue of the Brooklyn pastor and his support of all people, regardless of race.

The ceremony marked the end of the diocesan investigation into the cause of sainthood for Msgr. Quinn and was part of the day’s program that included a pastors’ meeting, a forum on racism and a dinner with about 400 priests present.

Joining the vespers were parishioners from St. Peter Claver Church, Bedford-Stuyvesant, where in 1920, Msgr. Quinn founded the first Brooklyn parish for black Catholics.

The late Brooklyn pastor who also served as a U.S. Army chaplain in World War I, was a champion for the rights of black Catholics who were often not welcomed in white parishes.

He built Little Flower Children’s Camp in Wading River for black orphans, even though the Ku Klux Klan
twice set fire to the Long Island complex, which was then part of the Brooklyn Diocese.

Msgr. Quinn, who had an intense devotion to St. Therese the Little Flower, also became well known for the parish novenas at his church that attracted thousands from all over the diocese and beyond.

Bishop DiMarzio explained that the local canonical process to support the canonization of Msgr. Quinn has been going on for 10 years.

“We now send it to Rome,” Bishop DiMarzio said. “And we dedicate this day to him. He was a great man.”
Bishop DiMarzio explained that he has a personal devotion to Msgr. Quinn that goes back 10 years when he was rushed back to the hospital after complications from heart surgery.

“All during that time, all I could think . of was Msgr. Quinn,” the bishop said. “He kept me alive. I don’t know why he came to me, but he was present to me that day. Personally, I feel this man is a saint. His life stood for something very important that we still struggle with today. He was a hero who led us from division to unity, from hatred to love.”

Bishop DiMarzio’s story is included in the package going to Rome.

Msgr. Paul Jervis, the Brooklyn priest who is spearheading the campaign for the cause, preached a passionate homily in which he said, “Father Quinn, as he preferred to be called, wanted marginalized people to find a place in his heart. He offered a place for those who were not welcome because of the color of their skin.”

Msgr. Jervis, the pastor of St. Francis of Assisi – St. Blaise, Prospect Lefferts Gardens, pointed out that it was prophetic that Msgr. Quinn was born on the day that Peter Claver, who ministered to black slaves
in Colombia, was canonized a saint. Mary Clare Quinn, the great-niece of Msgr. Quinn, attended the service.

She recalled, “They always called him the Monsignor, but he liked to be called Father. The family was all very proud of the work he was doing at Little Flower, and we all contributed during the winters and summers, going out there to help. They used to burn crosses at our house in Mineola, even after he was gone, but my family stared fear down.”

Earlier in the day, the priests of the diocese attended a meeting at which they heard the results of diocesan-wide hearings that were held on racism. They also listened to a presentation by Donna Grimes, Assistant Director for African-American Affairs for the U.S. Conference of Catholic bishops.

She spoke about the bishops’ 2018 pastoral letter, “Open Wide Our Hearts,” which deals with racism in American society.

“The bishops have realized that racism affects us all in different ways,” Grimes said.
“Part of our job is to frame racism in new ways. We need to look for new ways to frame the narrative about racism.”

Saying that “we sometimes don’t see how racism is in our institutions and structures,” she urged the clergy to preach about racism, not only from the pulpit, but also in Catholic schools, explaining that schools also allow an opportunity to speak about the history of the United States.

She asked priests to be mindful that diversity is represented in parish leadership positions and that they look for opportunities for parish groups to study the bishops’ pastoral letter and then discuss it. She also
asked that parishes employ minority-owned businesses.

She said that next year’s National Catholic Youth Conference will offer a listening session about diversity.

She recommended that Sept. 9, the Feast of St. Peter Claver, might be a good time to plan a celebration of diversity and suggested that liturgies be more culturally diverse to represent the different communities celebrating them.

“The pastoral letter is aimed at everyone,” she said. “There’s no silver bullet. But bringing small groups together is a start. Taking the time to listen to and validate others’ stories is very valuable.”