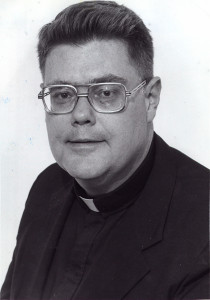 Msgr. Gerald J. Langelier, 78, pastor emeritus of Our Lady of Mercy parish, Forest Hills, died Friday, July 19. He was found dead in the swimming pool of his private residence in Southhold, L.I.

A Mass of Christian Burial at the church was scheduled for July 19.

From 1979 to 1984, he was the Episcopal Vicar for Vicariate D while residing at Resurrection-Ascension rectory, Rego Park.

In 1984, he was named pastor of Our Lady of Mercy and served there until 2007 when he retired.

Msgr. Mahoney said that Msgr. Langelier was one of the parish priests at Blessed Sacrament, Jackson Heights, who helped guide his own vocation.

“Wherever he was, he was well loved by the people,” recalled Msgr. Mahoney. “He was kind, gentle, compassionate and very understanding. He also was very intelligent and a very pastorally-minded priest.

“He certainly was a very dedicated priest who always was concerned about other priests in the many things he was asked to do for the diocese.”

Msgr. Langelier is survived by his brother Robert of St. Petersburg, Fla. Burial was in Mount St. Mary Cemetery, Flushing.