Unfortunately, I was not around, but if I were, I know I’d be glued to ABC watching whatever 19-inch JVC television I could find – preferably in color.

Of course, I’d be watching the rebroadcast of the famous “Miracle on Ice,” when the 1980 U.S. men’s hockey team defeated the mighty Soviet Union, 4-3, in the semifinal medal round of the XIII Olympic Winter Games in Lake Placid, N.Y.

In the ultimate David vs. Goliath matchup, 20 college kids from across America defied all odds against a Soviet Union team that had won the past four Olympic gold medals handily. This feat has been referred to as the greatest sports accomplishment of the 20th century. 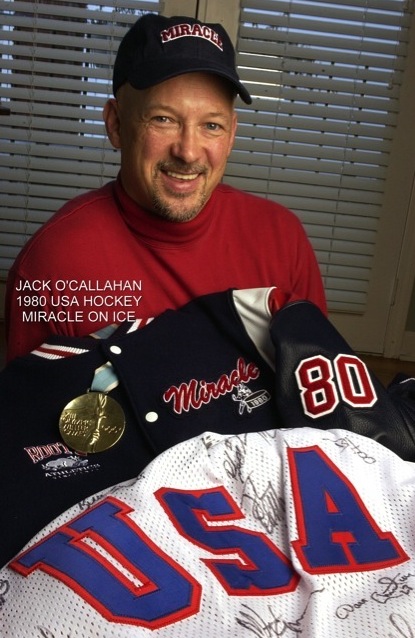 One of those 20 players was Jack O’Callahan, a defenseman from Boston University who was raised Catholic in St. Catherine of Sienna Church in Charlestown, Mass., where he was an altar boy and attended the parochial school.

He was only 23 years old during those Olympic Games, and he was a vital member of the team known for his gritty play and tenacious attitude.

“The Olympic experience was awesome,” O’Callahan said. “We had a great group of guys, and (head coach) Herb Brooks was a real leader and visionary when it came to development and training on and off the ice.”

Still, as much as this team prepared in the seven months prior to the Olympics, defeating the Soviet Union would be a long shot.

“It is safe to say that the 1980 Russian team had been together for 10 years and had, in that time, lost less than five games in international competition,” O’Callahan said.

Three days before the Olympics, Brooks invited the Russian team to Madison Square Garden in Manhattan for an exhibition game. The result was a 10-3 drubbing of the young American squad – not exactly the momentum the U.S. envisioned upon starting the Lake Placid games.

In that game, O’Callahan injured his left knee, but he was deemed healthy enough to play against the Soviet Union in the medal round. There was no way he’d miss that game.

“I was an athlete, and I wanted to help my team compete,” he said. “An injury was not going to keep me from that if I could fight through the pain. It’s the Olympics, and I had just worked my whole life to be there. I was willing to do anything to stay there and finish it.”

According to O’Callahan, Brooks addressed the team before the game and told them that they had nothing to fear and that sometimes in life, you have to walk up to the tiger and spit in his eye.

“Now, he (Brooks) said, was the time to walk up to that tiger and rip his heart out,” O’Callahan recalled. “He told us to play with confidence and believe in one another.”

O’Callahan said that the team was surprisingly relaxed as the game began, since their expectations had been lowered after being blown out in the exhibition game. The team instead looked for small victories, like a good shift or penalty kill.

“We were more interested in surviving and staying the course shift by shift,” O’Callahan said. “We weren’t worried about winning as much as we were focused on staying in the game, keeping it close.”

When Mike Eruzione’s goal broke a 3-3 tie midway through the third period, the dream started to become a reality. O’Callahan said he’s not sure how much his faith played a role in that win, but some sort of divine intervention must have been present. The U.S. went on to defeat Finland in the gold medal game.

In a tumultuous time in our nation’s history, the country needed this victory. Between the Soviet Union’s invasion of Afghanistan during the Cold War to the hostage situation in Iraq to gas shortages on American soil, the “Miracle on Ice” was necessary to divert the nation’s attention temporarily in an example of how sports can sometimes transcend society.

“While our victory was nothing more than a sports achievement, the excitement of it all unfolding on a global stage in an Olympic environment, fraught with feelings of patriotism, gave the American public something to feel good about,” O’Callahan said. “The fallout from our victory, from a social perspective, was that the country began believing in itself again, and the collective mindset seemed to go from one of fear and apathy to one of rebirth and confidence.”

As ABC sports commentator Al Michaels famously yelled in the waning seconds, “Do you believe in miracles? Yes!”

Well, O’Callahan and 19 other college hockey players believed in miracles, and that game is still celebrated today – 34 years later – as one of the most iconic sports moments of all-time.

I wasn’t even alive in 1980, yet I still get goose bumps when recalling the “Miracle on Ice.”