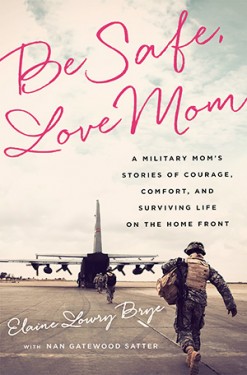 WASHINGTON (CNS) – There are some conversations that most parents are never truly prepared for, and some that they probably never want to have. Their son or daughter telling them about wanting to join the military is definitely among them.

In her just-released book, “Be Safe, Love Mom,” Elaine Lowry Brye seeks to make that conversation, as well as the entire lifestyle change following it, much easier for mothers whose children have chosen to don a uniform and serve their country, regardless of the branch.

In addition, she offers practical, emotional and spiritual advice to mothers who are beginning to realize that, in a certain way, they too will be going through the rigors of military training and its subsequent lifestyle with their sons and daughters.

As it says in the book, “While our loved ones are away, acclimating to their new lives as soldiers, we also are undergoing our own initiation period, adjusting to our new identities. … We need to understand that we are at the beginning of a long and steep road.”

“When your child joins the military, you don’t just cut the apron strings, they’re cut for you with a machete,” Brye told Catholic News Service (CNS) in a phone interview. “There are no books out there that tell you how to parent an adult, much less a motivated, independent warrior.”

“You hear a lot about spouses and a lot about the warriors themselves, but I think it’s also good to have that voice (of the parents)” be heard, she said.

The book discusses the author’s transition from raising her children to watching four of them go through training, commissioning and countless deployments and returns. Along the way, she describes a long journey of anxiety, pride, worry, fear and ultimately a reliance on the strength of God to get her through the difficulties that accompany the parent of a service member.

“God is essentially what holds me together through the challenges of life, whether my children were in the military or not … but when you elevate it to when you have no control over what happens to your children, when they’re in the military, it’s right there in your face,” said Brye, a Catholic. “I have to hang on to that belief that God is caring for me and caring for my children, but through it all, God is there for me.”

Brye and her husband live on a farm in northeast Ohio. Husband Courtney is a retired Air Force pilot. Four of their five children are in the military: three sons and a daughter are officers, one each in the Army, Navy, Air Force and Marine Corps.

In one chapter of the book titled “I Believe in Miracles,” the author talks about her relationship with Psalm 91, often referred to as the “Warrior’s Psalm,” which she recalls sharing with another military met at a doctor’s appointment.

Following an “impromptu prayer session,” the author noted that “there are no atheists in a foxhole. And I don’t think there are many atheists who have kids in a foxhole, either.”

In the interview, Brye discussed the psalm with CNS, saying “I just love Psalm 91. There are so many times where I just picture myself protected under His wings. I need that protection.”

The author’s spiritual repertoire extends far beyond the psalms. She also finds it somewhat funny that, while attending Catholic school as a young girl, the nuns who were her teachers assumed she was going to take holy orders later in life.

“I was a voracious reader and in a family with so many kids, mom couldn’t take us all to the library, so I went to the one at school,” said Brye, who grew up in a military family herself, the oldest of seven children.

“Naturally what they had there were the lives of the saints, so I read those. The nuns noticed that I was reading all of them and decided that I had a vocation,” she recounted, laughing.

The lives of the saints and martyrs also were on her mind in a trip to Afghanistan she describes in the book.

“I can’t go into much detail for obvious reasons,” she told CNS, but “there are a number of believers in Afghanistan and their lives are at risk if they are discovered. … The last displays of publicity have brought it more into the public eye, but there are martyrs everywhere.”

When asked if she saw her children’s call to military service as one that seeks to defend the freedom to worship for the persecuted Christians she met and others, Brye responded, “I do.”

Editor’s Note: “Be Safe, Love Mom” was published by PublicAffairs, part of the Perseus Books Group. For more about Brye, visit besafelovemom.com.