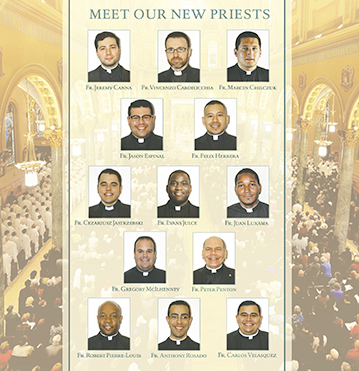 Bishop Nicholas DiMarzio will ordain 13 men to the priesthood for the Diocese of Brooklyn on Saturday, June 28, at 11 a.m. at St. Joseph Co-Cathedral, Prospect Heights. The class of ordinands is the largest for any diocese in the country this year.

Five are foreign-born, while eight were born in the U.S.

The class also includes the first two newly ordained to have lived at the Pope John Paul II House of Discernment in Cypress Hills.

For photos, brief biographies and details of the first Masses of thanksgiving of the men, please click on the links below. Click on the image at right to see a bigger version of the poster.