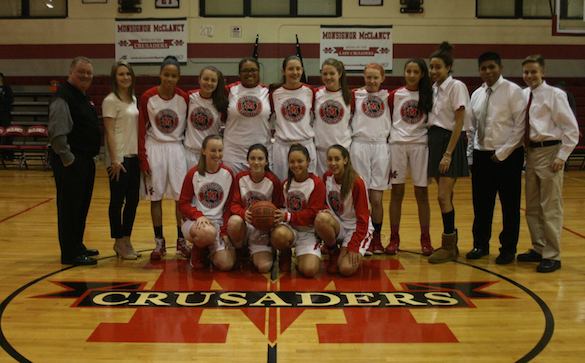 The Msgr. McClancy M.H.S., East Elmhurst, girls’ varsity basketball capped off another impressive season in just the third year of the school being co-ed. The Lady Crusaders finished as the runner-up in this year’s GCHSAA Division II city championship.

In the title game, McClancy was down by eight points with six minutes to go, but the team fought all the way back to take a one-point lead with 14.3 seconds left. But a player from the Academy of Our Lady of Good Counsel, White Plains, drained a three-pointer at the buzzer for a 48-46 win.

In getting to the final game, McClancy defeated St. Edmund Prep H.S., Sheepshead Bay, who had captured this year’s diocesan championship and had beaten the Lady Crusaders three previous times this season.

The team began the season 3-9 but wound up finished 16-12. After a team meeting at about the halfway point of the year, the girls responded by going 13-3 in their final 16 games.

“I am very proud of these girls,” said head coach Dewey Hopkins. “Nobody works harder.”