A “flash mob” is a large public gathering in which a group of people – typically organized by some form of social media – descends upon a particular place.

When the idea of a flash mob is mixed with the Catholic Church, a “Mass Mob” is formed.

The New York City Mass Mob is a grassroots organization consisting of an army of Catholics organized through social media. On June 1, St. Matthew’s Church, Crown Heights, received the first-ever visit from the Mass Mob.

At the 11:30 a.m. Mass celebrated by Father Frank Black, pastor, a group of nearly 60 individuals led by Michael Cadigan, a young Catholic from Bayside, joined in the vibrant celebration with the regular parishioners at the church.

Cadigan’s goal with the movement is aimed at revitalizing and restoring Catholic churches in the five boroughs of the city.

Origins of the Movement

He returned to the diocese to continue his education at CUNY Queens College, where he and his friend James Blanchard became involved with Father Paul Wood and Brother Padraic Campbell at the Catholic Newman Center.

One night, Cadigan took a drive, turned on the radio and listened to a story about a Mass Mob in Buffalo, in which Catholics were packing historic churches to bring about awareness of the movement.

He then researched other Mass Mobs in Columbus, Ohio, and Philadelphia and decided to start the New York City Mass Mob.

“I think we could use something like that (Mass Mob) in New York City as an overt Catholic evangelization movement,” Cadigan said. “I thought it was a cool idea and a way to get a lot of people that aren’t really religious involved in going back to church.”

Initially, establishing the movement seemed like a daunting task, but Cadigan began gaining momentum once he set up a website and Facebook page with the help of his friend Garvin Lawrence. He reached out to every single administrative pastor in New York City.

He hand-delivered letters by slipping them under rectory doors, and he was thrilled to receive a flurry of emails from the pastors of different churches asking to receive a visit from the Mass Mob.

Each month, Cadigan will compile a list of four parishes. The winning parish is decided upon by a public vote, and the date of the visit is chosen by the parish’s pastor and then publicized heavily on social media.

The first four finalists were St. Matthew’s; St. Stanislaus Kostka, Maspeth; Blessed Sacrament, Cypress Hills; and St. Elizabeth of Hungary, Manhattan. Parishioners at St. Matthew’s rallied behind the vote and even distributed fliers throughout the community, which ultimately played a role in winning the vote.

“We’re very blessed to have St. Matthew’s as the first location for the Mass Mob because it’s very unique in terms of its music program and preaching style,” Cadigan said. “That’s the type of energy that’s going to reinvigorate the Catholic faith. It’s going to start there and go outward.”

Each winning parish also receives the “Mass Mob Money Bomb” in which the parish can receive a donation straight from a link on the Mass Mob website.

The spread of this movement has taken shape from various forms of social media. Once Cadigan set up the Facebook page, he received a number of messages from people offering help.

“I am very amazed by the response,” he said. “It just goes to show the level of fervor people have about their faith. One person is definitely not going to be able to do this. A lot of devoted people are coming together to make this work.”

Facebook and Twitter have allowed Cadigan to send out mass messages and updates simultaneously and free of charge. Most importantly, the cutting-edge nature of the movement on social media has sparked the interest of young people, who have a tendency to rally around these types of grassroots movements.

“Consider the Mass Mob as a catalyst for people to develop their faith,” Cadigan said. “All they have to do is join the movement and go to the church the day of the Mass Mob with other people just like them searching for God, and then they’ll start to ask questions about how to get more involved.”

In early March, the Facebook page for the New York City Mass Mob had 100 “Likes,” but in just three months, that number is approaching 900 – showing how this movement has exploded on social media.

Cadigan said he is expecting the movement to continue growing, as the plans for the next stop are being formulated. If the interest further increases, he said he’d consider more Mass Mob visits as a result.

“I really think that if this is something that everyone participates in, we can generate enough media attention and we can get enough popularity and actually start a trend of people going back to Catholic churches,” he said. 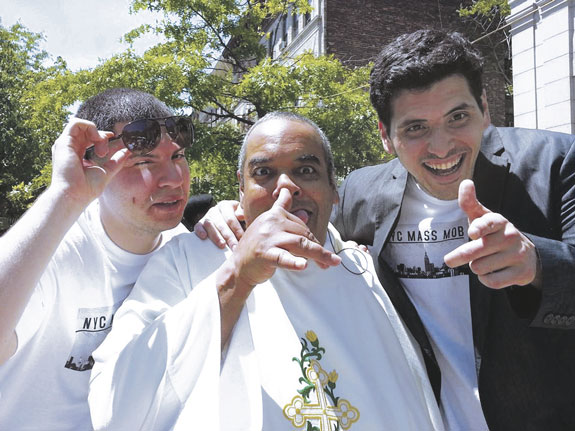