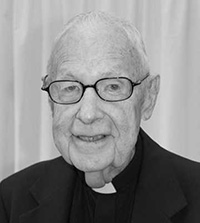 Father James M. Gilligan, M.M., 87, a Maryknoll priest who only this month marked his 60th anniversary of ordination, died May 17.

Born in Brooklyn, he attended P.S. 193, and graduated from St. John’s Prep, Bedford-Stuyvesant. He attended Maryknoll School of Theology, Ossining, N.Y., and he earned a degree in canon law from St. Thomas University, Rome.

In 1962, Father Gilligan went to Rome, Italy, for advanced studies but he returned to the Cheong-ju Diocese to serve as chancellor and pastor of Sacred Heart Mission and vice-officialis of the Tae Gu Regional Tribunal.

He continued to serve on the Tae Gu Regional Tribunal, as Pusan Diocesan consultor, and in 1978 he became a member of the Maryknoll Regional Council. From 1985 to 1990, he was pastor of the Ku Bong Parish in central Pusan. In 1990, Father Gilligan left the Ku Bong Parish to become a hospital chaplain and director of pastoral care.

Father Gilligan retired in 1999, with residence in the Maryknoll Seoul Center House. In 2007, Father Gilligan was assigned to the retirement community in Ossining.