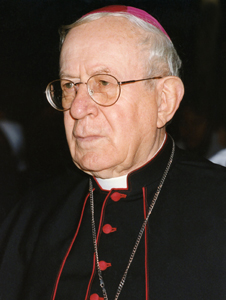 Italian Cardinal Giovanni Cheli, a longtime Vatican diplomat and retired head of the Pontifical Council for Migrants and Travelers, died in Rome Feb. 8 at the age of 94.
He had celebrated the 70th anniversary of his priestly ordination in July, presiding over a Mass in Asti, the northern Italian diocese for which he was ordained in 1942.
He worked at Vatican embassies in Guatemala, Spain and Italy before being assigned to the Vatican Secretariat of State. From 1973 to 1986, he lived in New York and served as the first head of the Vatican’s permanent observer mission to the United Nations. He was ordained an archbishop in 1978.
In 1986, he was named pro-president of the then-Pontifical Commission for Migrants and Travelers and became president of the office when it became a council.
Previous Obituaries Story
Next Obituaries Story