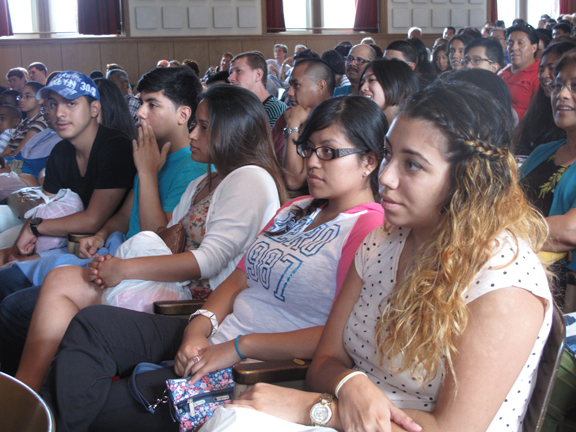 In the final week before departing for World Youth Day in Rio de Janeiro, Bishop Nicholas DiMarzio called together all the diocesan pilgrims to gather in prayer and preparation.

He reminded them that even though the pilgrimage should be fun, it is not meant to be a vacation.

“We are going because we are pilgrims,” he said during his homily at the commissioning Mass July 13 at the Immaculate Conception Pastoral Center, Douglaston. “We go to see Christ in a special way, in the person of the Holy Father, our pope, Pope Francis…We also go to find ourselves and the meaning of our lives.”

Pilgrim Marsha Desire, 17, from St. Teresa of Avila parish, Prospect Heights, said she is looking forward to gaining a new perspective from her pilgrimage to Brazil.

“I’m open to anything,” she said. “I just want to be there and take in as much experience and information as I can.”

Desire said her mother was at first hesitant about embracing her daughter’s World Youth Day plans. However, when she saw her daughter’s dedication, she fully supported her. After more than a year of preparation and fundraising, the young pilgrim said she is ready to undertake her journey to the southern hemisphere.

“I’m excited, but I’m kind of scared because I’ve never been on a plane – but I’m good!” she said.

Pilgrim Valerie Villanueva, 22, from Our Lady of the Snows, North Floral Park, said she felt reassured after the send-off meeting. She said the pilgrims all seem very friendly, and she hopes this reflects the attitude of all the pilgrims from around the world.

One way in which the pilgrims were encouraged to meet some of the 1.5 million pilgrims expected at this year’s World Youth Day was through a Pray with the Pope coin project. Each pilgrim was given 75 coins to distribute as part of the project, that was begun by a group of laypeople and partially funded by the DeSales Media Group, the parent company of The Tablet.

Each pilgrim has been asked to distribute 25 coins in the diocese and 50 in Brazil. Although a barter system of memorabilia is a well-established tradition during World Youth Day, this project takes the idea a step further. Each person who receives the coin can register the coin online at praywiththepope.org, choose a time to pray for the pope’s intentions and pass on the coin to another person. Each participant will be able to follow where the coin has been and where it has gone. There will also be an option to leave a message for future recipients of the coin.

“I really like this idea,” said Villanueva. “It really shows the six degrees of separation.”

She said she is confident that she will be able to distribute all her coins. Her parish, Our Lady of the Snows, has already organized an event for the pilgrims to distribute some to fellow parishioners.

Pilgrim George Prezioso, 17, from St. Patrick’s parish, Bay Ridge, said he thinks the coins will help him engage with people outside of the diocesan group during World Youth Day. He said he hopes to give out at least 25 coins during the week-long trip.

Father Jose Carlos DaSilva, from St. Rita’s, Long Island City, said the aspect of a world community is important to keep in mind during World Youth Day. Father DaSilva, who will travel with the diocesan delegation, is the only Brazilian-born priest serving in the Brooklyn Diocese.

“I feel so happy to show American people how we feel about our faith and how we organized World Youth Day,” he said.

Part of the reason for the gathering in Douglaston was for pilgrims to receive materials and logistical information needed for their trip. Father Gerard Saur, pilgrimage coordinator for the diocese, gave the pilgrims an overview of their packed schedule while in Brazil.

The young people will be engaged in prayer and fellowship from early morning to late evening nearly every day during their trip. Their activities include catechesis, Stations of the Cross, spiritual exercises led by Bishop DiMarzio, Eucharistic adoration, a visit to the Christ the Redeemer statue, an eight-mile hike to a vigil in anticipation for their Mass and the liturgy with Pope Francis.[hr]

Stay tuned to NET-TV for live coverage of all the important events of World Youth Week. Tablet and NET correspondents will be in Rio de Janeiro to cover all the activities of the diocesan delgation.