In less than two weeks, Matthew and Stephanie Zinser and their three young sons are leaving everything behind – their families, jobs and Glendale home – to answer the call to live as missionary disciples.

They will relocate to Detroit, Mich., in early September, to join four other families, laywomen and a priest, in forming a community of faith to share the Good News of the Gospel.

“I’m very nervous, but I’m very excited,” Stephanie said. “Because I have seen all of the wonders that God has done in my life and in my parents’ life, I feel like it’s time to go out and announce to those who don’t have any hope, to those who haven’t heard, that God loves them.”

The family belongs to the Neocatechumenal Way, and they feel called to be among the hundreds of families currently carrying out “missio ad gentes,” or a mission to the nations, an effort to evangelize in areas of the world where the Church is not very visible.

Last Sunday, the five members of the Zinser family stood before the congregation at Presentation of the Blessed Virgin Mary Church in Jamaica, and received a blessing for the journey ahead of them.

“It is not every day that we are able to acknowledge in person the hard work that missionaries do,” Father Manuel J. Rodriguez, pastor, said to his congregation.

“When it is a whole family that decides to leave everything… for the sake of spreading God’s Gospel, this is not just uncommon, but tremendously special.” 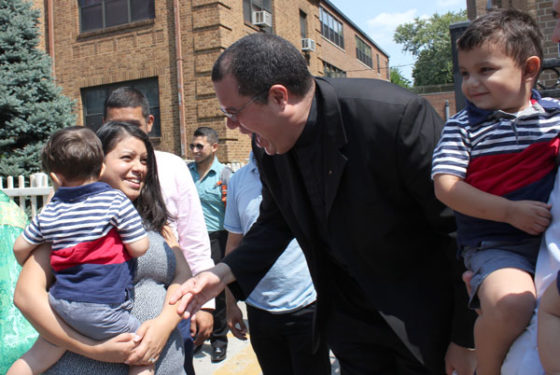 Father Rodriguez commended the couple on “taking Jesus seriously in their life as a family.”

Matthew and Stephanie are familiar faces in the diocese, serving most recently as co-directors of religious education at St. Benedict Joseph Labre parish, Richmond Hill. Matthew, who grew up in St. Matthias parish, Ridgewood, and attended Cathedral Prep Seminary, Elmhurst, also serves as music director at Our Lady of Victory Church in Floral Park.

The couple, who will celebrate five years of marriage this fall, are members of the Neocatechumenal community at SS. Peter and Paul parish, Williamsburg, where Father Rodriguez previously served as pastor. This past Lent, they led a three-month catechesis at the Jamaica parish.

They discerned their call to become a mission family through prayer and discussion over the last two years. They volunteered with the knowledge that they could be asked to go any city in the world.

But for this family, there was a unique consideration: two of the couple’s sons have Shwachman-Diamond syndrome, a rare disorder that requires regular blood tests and monitoring. It was essential for the boys to have access to the specialists and facilities they have here in the U.S.

Earlier this year, Detroit’s Archbishop Allen H. Vigneron called for a “radical overhaul” of the Church in his diocese. He invited the Neocatechumenal Way to establish a family mission team to aid in the work of the new evangelization. For the Zinsers, it was the perfect fit.

The couple is excited to help with the rebirth of the Catholic Church in Detroit, a city suffering from poverty, racial tensions, crime and urban decay. The Church there has faced substantial challenges in recent years, including declining membership, resulting in parish mergers and closings.

When they arrive, the Zinsers’ role will be to spread the Gospel through their daily example of living as a Christian family. They’ll actively reach out to neighbors in their community, evangelize door-to-door, pray in public squares and share their own testimonies about how God works in their lives.

One of the topics the couple discusses is their sons’ illness, which, Matthew said, could have easily driven him away from God and the Church. But because of the encounter he’s had with God in the Neocatechumenal Way, he is able to look at the situation “through the eyes of faith.”

“My wife and I don’t say, ‘Why us God?’ We’re able to put our lives and everything we do in God’s hands,” he said.

“God has given us these two children for a reason,” Stephanie added. “In the suffering, we see His face.”

Understanding that it takes years to develop relationships and build the church, the Zinsers see their move as a permanent one.

The family has found a place to live, and Matthew hopes to find a position as a parish music director. In the meantime, he says he can get by with construction work.

“We’re going with faith that God will provide for us,” he said.

They realize that doesn’t mean there won’t be struggles and challenges ahead, but they will have each other, and their fellow mission families, and many people, including those back home, supporting them in prayer.

“I’m very happy to bring up my children in this way of living, which is not going to be easy because everyone thinks we’re crazy, even our own families,” Stephanie said. “But maybe one day, with our actions, they can see the love of Christ.”

One thought on “Local Family Leaving for Missionary Work in Detroit”