As football season continues this autumn, for some it’s still always baseball season.

Even as the weather begins to get colder, there will undoubtedly be traces of baseball being played in the city this winter.

And we have Anthony Iapoce to thank for that.

These kids would be wise to listen to what Iapoce has to say, since the local baseball guru played 11 professional seasons and is now the special assistant to the general manager and minor league hitting coordinator for the Chicago Cubs.

He’s given over 15,000 private lessons, and he’s organized camps and clinics around the country. And it all started right in Queens.

At St. Joe’s, Iapoce was constantly playing sports with his friends in the gymnasium or out on the schoolyard. His CYO teams were very competitive and consistently won championships in both basketball and baseball.

His athletic talents brought him to Msgr. McClancy M.H.S., East Elmhurst, where he excelled as the point guard on the basketball team and the center fielder on the baseball team. In the respective sports, these positions are reserved for natural-born leaders, so even at a young age, Iapoce possessed these qualities.

During his high school career, he led his teams to four N.Y.C. championships, which set a McClancy record. He won five different M.V.P. awards, was awarded All-City honors in both sports his senior year and was the recipient of the Senior Student Athlete Award in 1991. That same year, he was featured in the Feb. 16 issue of The Tablet for being the leader responsible for guiding McClancy into the “CHSAA’s Fast Lane.” At the young age of 23 in 1996, he was inducted into the McClancy Hall of Fame as part of the inaugural class.

Iapoce said that his coaches at St. Joe’s and McClancy, as well as his parents, taught him how to be accountable on and off the field. He said his coaches were competitive yet compassionate, and he’ll always remember the example his McClancy junior varsity basketball coach Eddie McGlone set for him.

“He’s (McGlone) probably the best coach that I’ve ever been around,” Iapoce said about his former coach, who is now the associate director of advancement at McClancy. “He made a huge impact on what accountability was and how to be accountable for your team and how to win games.”

In addition to McGlone, Iapoce said that he’d always hold a debt of gratitude to his McClancy freshman basketball coach Artie Cox, who also coached the two-sport star at St. Joe’s.

After McClancy, Iapoce accepted a baseball scholarship to play at Lamar University in Beaumont, Texas. After adjusting to the culture shock of coming from New York City to playing ball in a city of just over 100,000 people, he had a successful college career to the point where the Milwaukee Brewers drafted him in the 33rd round of 1994 MLB Draft.

In 845 professional games, Iapoce sported a .273 batting average and reached the Triple-A level of the minors with the Brewers and later the Florida (now Miami) Marlins.

Though his playing career ended after the 2005 season, he knew that his future would remain in baseball. He served as a hitting coach in the Marlins’ minor league system for four seasons before being hired as the roving hitting coordinator for the Toronto Blue Jays.

Accountability with the Cubs

In November, 2012, Iapoce was hired to his current job with the Cubs. Through his playing and coaching career, he was part of seven minor league championship teams, so he’ll now desperately try to help the Cubs win their first World Series since 1908.

His responsibilities include visiting all of the Cubs’ minor league affiliates and spending time with the players and coaches to get everyone on board with the parent club’s hitting philosophy.

“From mechanics to approach to plate discipline, Anthony is as knowledgeable about hitting as anyone I’ve been around,” said Theo Epstein, the Cubs’ president of baseball operations. “He really connects with young hitters, taking the time to get to know them and making work fun and progress attainable. He is a real difference maker who simply makes hitters better.”

In addition to helping young players with their swings, Iapoce gets the players in tune with the mental side of the game, which is essential to long-term success.

“Anthony has impacted the way I approach playing the game,” said Miami Marlins’ slugging right fielder Giancarlo Stanton. “I love the way he teaches hitting. He covers the swing and shows how important the mental game is.”

Iapoce’s travels for baseball have led him to every state in the U.S. except Alaska and even to the Dominican Republic, where the Cubs have a baseball academy. He’s constantly on the road, so having a strong support system at home – his wife Suzanne and 14-month-old daughter Lily – has allowed him to follow his dream.

“My wife is super supportive and understanding,” Iapoce said. “I’ve been doing this my whole life, and she’s super supportive. She just wants the Cubs to win and do whatever we can to get them a win.”

Much of what he teaches the young players has to do with the accountability he learned from his parents and his coaches at St. Joe’s and McClancy. Especially in the low minor leagues, many of the players up until that point have never experienced failure. They were easily the best players on their former teams, but they soon realize that all 25 guys on their new teams were also the best players on their respective teams. Iapoce is quick to point this out.

Once he got the Cubs job, he began exploring the possibility of starting a local clinic in Queens. He said the amount of money being spent by parents on baseball instruction is through the roof right now, so he wanted to ensure that the kids were being taught the correct fundamentals.

“I wanted to give back what I’ve learned in 20 years of pro ball,” he said.

All the coaches that help out at these clinics are from Queens, and many have followed Iapoce’s path through the local CYO leagues. His main assistant, George Carroll, is a 2006 graduate of Holy Cross H.S., Flushing, and played the past three seasons in the Blue Jays’ minor league system.

The Dec. 14 clinic will start with an hour and a half of drills focused on defense, base running and conditioning, and then the next hour and a half will be all hitting drills, with a few fun competitions sprinkled in.

Throughout his baseball career, Iapoce’s hard work, dedication and positive attitude have helped him develop his unmatched passion for teaching the game. And now he’s passing on his experience to countless youngsters looking to follow in his footsteps.

For information about the winter clinic, view the box below. 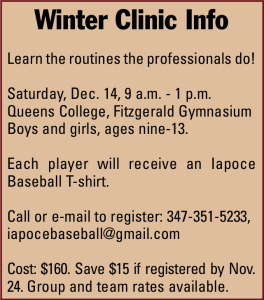