A few days before last Christmas, I received an e-mail from a gentleman named Jack Fellin.

Fellin played football at Mount St. Michael Academy, the Bronx, in the late 1950s and then played at the College of the Holy Cross, Worcester, Mass. He asked me if I knew anything about Marine Corps Col. John Whalen and the 1961 Tablet Catholic All-American Football Team.

Fellin said he and a group of his Holy Cross teammates were nominating Col. Whalen – who played right offensive tackle and was Fellin’s co-captain at Holy Cross – for the Holy Cross Varsity Club’s Football Hall of Fame and were trying to verify the latter’s achievements on the gridiron.

I said I didn’t know anything about the topic, since I came around long after 1961. But I said I would gladly help in the search for information.

With the assistance of diocesan archivist Joe Coen, I combed through the complete 1961 volume of The Tablet. Sure enough, on Page 27 of the Dec. 9, 1961 issue, there it was: The Tablet’s Catholic All-American Football Team with the name “Jack Whalen” feature

Benefitting from today’s forms of modern technology, I snapped a photo and sent it to Fellin, hoping this piece of evidence would help Col. Whalen’s case for induction into the Hall of Fame.

I was delighted to hear recently from Fellin that Col. Whalen was in fact elected, with the photo from The Tablet being an important factor. Col. Whalen was enshrined May 4 at a ceremony at Holy Cross, and he was joined by his wife Geri, four children and 14 grandchildren as well as the group of teammates that aided in his election.

“I was really surprised by the whole thing,” said Col. Whalen, 73. “I never even considered that I’d be elected to the Hall of Fame. I don’t even know if there are any other right tackles in the Hall of Fame.”

Col. Whalen played three years of varsity football at Holy Cross before enlisting in the Marines. In addition to being named to The Tablet’s All-Catholic Team as a senior in 1961, he also earned a spot on the Eastern College Athletic Conference’s All-East Football Team that same year.

While stationed at the Marine base at Quantico, Va., Col. Whalen played football for the base’s team. He said each military base around the country had a team, and those teams would play some great games against each other.

Each year, Leatherneck Magazine, published by the Marine Corps, chose an All-Marine team. Col. Whalen was selected to that team in 1963 and 1964 – the only two years he played for the Quantico team.

Col. Whalen served all over the globe, including tours in Okinawa, Japan, and Vietnam. He said playing football certainly gave him the right mentality for the Marine Corps, but it was his time in the classroom that really prepared him to serve his country.

“The Marine Corps was easy compared to the discipline of the Jesuits,” he said. “When I showed up for the Marines, I was surprised to find that the discipline was not as rigid as Holy Cross.”

He served 30 years in the Marine Corps and was involved in the field of telecommunications. He often incorporated what he learned on the football field at Holy Cross into his military life.

He said his coach convinced him that right offensive tackle was the most important position on the field. Though maybe that might not be the case, Col. Whalen realized that it didn’t matter what anyone else was doing as long as he was giving maximum effort to do his job.

The same goes for the Marine Corps, he said. Once he had everyone around him believing in themselves, his battalion achieved its full potential.

“Football is a team effort,” Col. Whalen said. “Of course being in the Marine Corps is a team effort too. We have to operate as a team. Everyone has to do their job, and every job is important.”

These days, Col. Whalen lives in Arroyo Grande, Calif., and spends his time as an avocado farmer. He also volunteers for the People’s Kitchen and the Salvation Army.

In looking back on his selection to the Holy Cross Hall of Fame, Col. Whalen said he was impressed that his teammates have been able to retain their bond after all these years. He has realized firsthand that camaraderie – whether between football teammates or fellow Marines – lasts a lifetime.

Personally, I enjoy finding links back to history, so I feel fortunate to have been a part of this whole situation. I’m glad The Tablet was able to play a key role in bestowing a prestigious honor upon a well-deserving recipient.

Below are photos from the event. 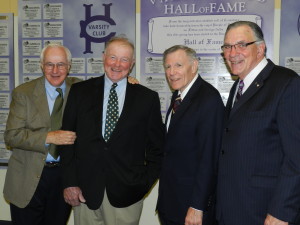 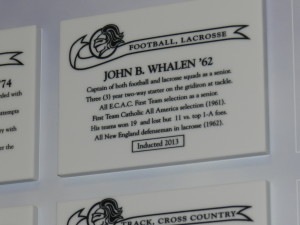 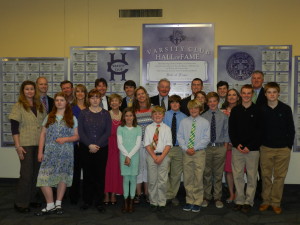 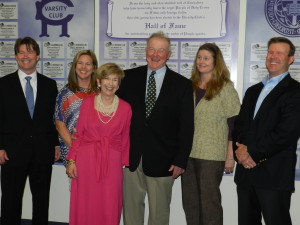 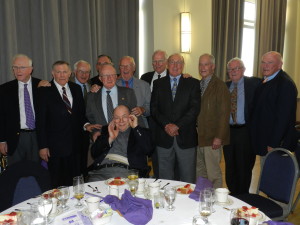 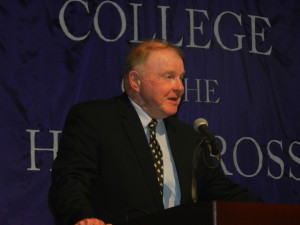 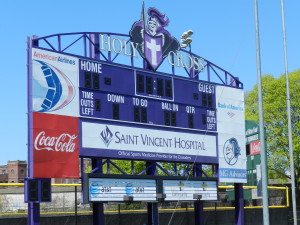