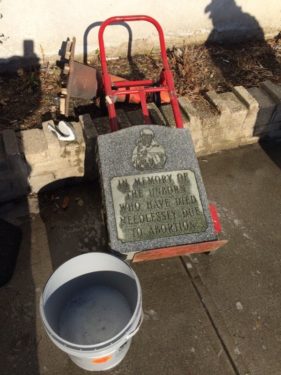 This is the story of a precious object that was lost and is now found and the members of the Knights of Columbus who made it all happen.

The treasure is a monument to the unborn that sat outside Msgr. William Burke K. of C. Council in Rockaway Beach for 21 years.

The gray stone memorial weighs 350 pounds and contains the inscription: “In Memory of the Unborn Who Have Died Needlessly Due to Abortion.” It had been dedicated in February of 1996 on Beach 90th St. and placed right next to a statue of the Sacred Heart as a reminder of the evil of abortion.

Apparently, someone didn’t care for the message. The monument went missing last October.

“It was clearly not a random act of vandalism,” says Richie Knott, Past Grand Knight. He wonders whether “we were targeted because of our Catholic faith and pro-life stance.”

The disappearance remained a mystery until January of this year when Matt Harris, a local resident who collects driftwood along the shore and turns them into pieces of art, was intrigued by a shiny object barely visible in Jamaica Bay, about 20 feet from the shoreline. He took a photo of the object and placed it on Facebook asking if anyone recognized it.

Knott’s wife, Barbara and fellow Past Grand Knight Andy McCracken both noticed the photo and thought it looked like the missing memorial.

Enter the alert Knights from Burke Council. They called Harris, who took them to the rock jetty that juts off Beach 88th St. and showed them where he had seen the object. They were told that the piece would not be visible until later in the day when the tide rolled out.

During low tide on the snowy, sleety afternoon, six Knights, with picks and shovels, made their way back to the spot.

“It was weird,” says Knott. “When we went back, there were three swans swimming right over the area where we were looking. It was as if they were guiding us. It was deeply moving.”

Within minutes, the men were able to unearth the stone and discovered that indeed this was their missing monument.

“It looks good now,” said John Gillespie, Past Grand Knight. “It had mud all over it but we took it back to the Council and we cleaned it. It was in one piece, no cracks.”

Gillespie feels that because of the size and weight of the monument, the theft could not have been the act of just one person. While the Council does have security cameras, they were not pointed at the memorial. Now they will be directly on the shrine.”

Regardless of who took the memorial or why, the rediscovery is being dubbed the “Miracle on Beach 88th St.”

The monument to the unborn will be rededicated with a Mass at the Msgr. Burke Council on Saturday, May 20, at 9 a.m. Father James Devine, chaplain to the Council, will be the main celebrant and will preside at the blessing of the stone. Other priests on the peninsula, as well as local politicians, will be invited.