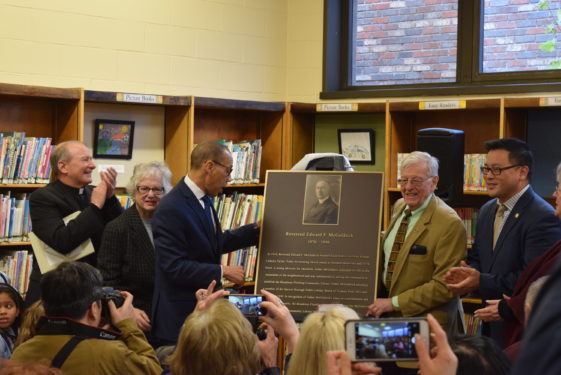 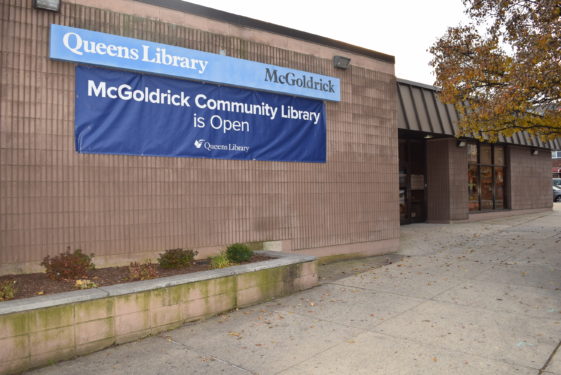 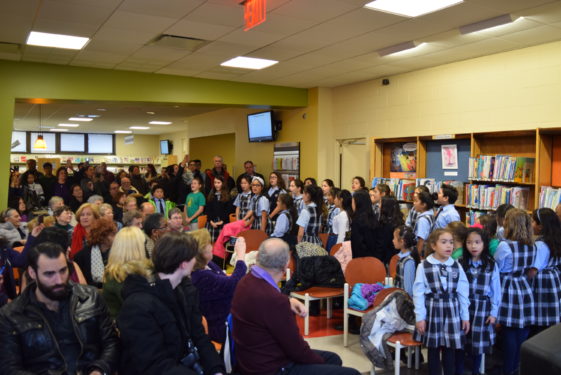 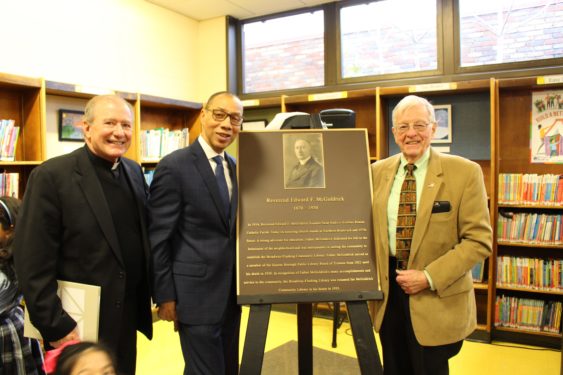 Not many people knew that the McGoldrick Queens Library in Flushing had been named in honor of a former pastor of St. Andrew Avellino parish.

Father Edward McGoldrick died in 1930 and the branch had been named for him three years later because of his tenure as a member of the board of the Queens Public Library.

The library was forced to move locations several times until it came to its present site at Leonard Square on Roosevelt Ave. in 1974. Everything regarding why the library was named after the Queens priest had been lost.

That’s when parish historian Joseph Brostek swung into action. When he asked the library staff if they knew who McGoldrick was and they couldn’t answer, he mounted an educational campaign that resulted in a rededication ceremony Nov. 28 so that the man who had done so much to build the parish, school, and library would always be remembered.

Brostek was delighted to finally see his work come to light. “It is great to see such a turnout here today,” said Brostek. “Father McGoldrick was assigned to build a church for the people here in Flushing because there was nothing close, but he also started to build a community. I started my campaign to have him properly recognized. Here we are today and that is not the end of the story but simply the beginning of a new chapter.”

Father Holcomb was celebrating his eighth anniversary as pastor that same day and prayed for the future of all.

“Father McGoldrick’s vision was to educate our young people and as we remember him, together I ask that we all pray that all of us will be open to the Holy Spirit,” said Father Holcomb.

“We pray that all who walk through the doors of this library in pursuits of arts and sciences may always be docile to the wisdom of God’s word. Grant that with true learning they will strive to create a more civilized world with genuine love.”

Walcott added, “Seeing so many people here that care so much is the type of atmosphere here, the warmth that these people have. The staff here knows everyone who walks in the door and are so happy to help. I was standing at the door greeting people and one woman walked in and said she hadn’t been here since her children were young, so I asked why did you come back today? She told me I knew I had to be here today. That is the type of community here always. The people are there to show their support no matter what.”