DETROIT (CNS) – It’s 1967, and Jack Kresnak and his classmates are sitting in a classroom at Sacred Heart Major Seminary H.S., Detroit, Mich., looking at the clock and waiting for their literature teacher to come through the door.

Students waiting in anticipation, already having completed their reading assignment, Shakespeare’s “Hamlet,” are ready to discuss the meaning behind the prose of England’s great writer.

Finally, in walks the teacher. He turns off the lights, lights a candle and leads the students in prayer. There was no lecture that day, but Father Bill Cunningham still taught a lesson. 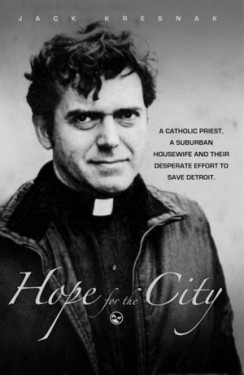 So it was for most of Father Cunningham’s life; the long-haired, motorcycle-riding Detroit priest was on a mission to save a city, according to Kresnak, author of “Hope for the City: A Catholic Priest, a Suburban Housewife and their Desperate Effort to Save Detroit.”

“He challenged and inspired all his students,” Kresnak said. “He taught us all to be in the moment, just sitting in the dark, not taking notes, but really concentrating on words from a recording of Richard Burton reciting the words to ‘Hamlet.’”

Father Cunningham helped Kresnak kick-start his journalism career, and when the priest died May 26, 1997, Kresnak’s old teacher gave him one last assignment, write a book about Focus: HOPE, the organization Father Cunningham started to improve the day-to-day lives of Detroiters caught up in the midst of race riots, crime and economic depression.

“I was a little overwhelmed at the start. I was thinking, ‘Where do I start?’” Kresnak told The Michigan Catholic, the archdiocesan newspaper.

“My first idea was to find one slice of Father Cunningham that I could get my arms around. I didn’t start from the beginning of his life or in 1968 with the founding of Focus: HOPE. I started with the arson that nearly destroyed Focus: HOPE in 1978.”