Not too long ago, Dominic Murray’s future burned brightly.

The Msgr. McClancy M.H.S., East Elmhurst, basketball star planned on continuing his hoops career at Farmingdale State College, L.I., after leading the Crusaders to a 19-7 overall record his senior year, 2008-09.

His work ethic and enthusiasm for the game made him an ideal candidate to achieve success on the basketball court, in the classroom and wherever his life path took him.

But in the blink of an eye, everything changed.

Murray suffered from an undetected cardiac abnormality but was cleared to play basketball upon his arrival at Farmingdale. However, on the team’s opening night – Oct. 5, 2009 – he collapsed on the court from sudden cardiac arrest.

The 17-year-old Murray was pronounced dead that night.

“In all my years coaching, he was the most likable young man I ever coached,” said McClancy head basketball coach Don Kent.

Kent grew fond of the way Murray handled himself on the court. Murray was always smiling, and his sense of humor kept all his teammates loose, even in pressure-packed situations.

“He was always one of the best players on the court,” said Dominick LaBattaglia, current McClancy senior guard who was a freshman when Murray was as senior. “He always wanted the ball in the last minute.”

In the aftermath of Murray’s passing, Melinda Murray, Dominic’s mother, was shocked and saddened to say the least. She made it her goal to ensure that other families would not have to experience what she endured.

“My reality…I didn’t want it to become someone else’s tragedy,” she said.

Mrs. Murray is the founder and president of the Dominic A. Murray 21 Memorial Foundation. This non-profit organization, established in February, 2010, is dedicated to raising awareness about sudden cardiac arrest and other potentially fatal heart conditions – through education, early detection, heart screenings and early defibrillation – while keeping Dominic’s legacy alive.

“I woke up one day and said, ‘I’m going to save a child,’” said Mrs. Murray.  “It really kept me going. I didn’t want what happened to me to happen to someone else.”

Sudden cardiac arrest occurs when blood stops flowing to the brain and other vital organs, causing loss of consciousness, abnormal breathing and seizure-like activity within minutes. It affects thousands of youth every year, and both athletes and non-athletes can be at risk.

The foundation has participated actively in community sports programs, provided academic scholarships to high school and college students and offered proper CPR/AED training techniques. The McClancy faculty and students have devoted their tireless support along the way.

“McClancy High School has stood by the foundation’s side since the time we started,” said Mrs. Murray. “They’re still taking care of him and sheltering him because he’s forever a Crusader.”

Queens assemblyman Jeffrion Aubry  from District 35 attended the tournament and addressed the crowd about the importance of taking care of one’s health. Aubry, a McClancy graduate, once suffered a heart attack while playing basketball.

“Melinda is my hero,” Aubry said. “I’ll follow her in whatever she does and wherever she goes.”

As competitive basketball games took place, tournament spectators could also visit free workshops in the gymnasium lobby to learn about CPR/AED training and sudden cardiac arrest. This information has the potential to save lives.

“Mrs. Murray is doing a great job with this,” said LaBattaglia, who was a recipient of one of the $2,100 scholarships in Dominic’s memory.  “She is a very strong woman, and everyone is supporting her.”

The championship game of this tournament was scheduled for Wednesday, Nov. 9. Both the winning team and McClancy will receive brand new automated external defibrillators.

In the future, Mrs. Murray and the foundation will continue living out the motto: “Every heart saved is Dominic’s heart beating one more time!” 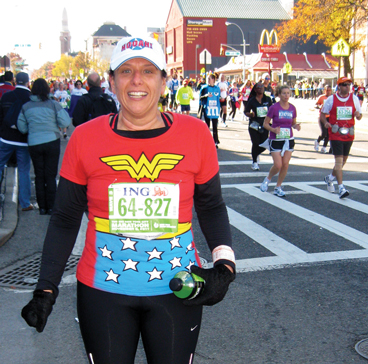