It was an exciting day on Saturday, March 1 for the Bishop Kearney H.S., Bensonhurst, basketball program at St. Francis Prep, Fresh Meadows.

After the junior varsity team earned a victory in the GCHSAA Division II diocesan championship, the varsity Tigers followed that up with an impressive 55-28 win over St. John’s Prep, Astoria, to capture their second straight diocesan title.

“I thought that if we got into the rhythm of our game…our running game…that would be an advantage for us; that, plus our pressure defense, I think that was the difference,” said Kearney head coach Rocco Sellitto. “We got a couple of quick turnovers and fast breaks, and it changes the complexion of the game right away.” 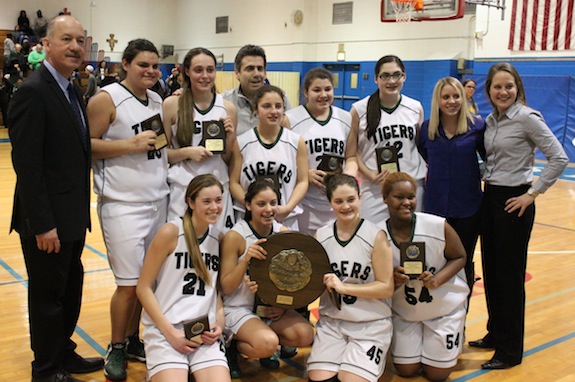 The Tigers caught fire offensively in the second quarter, outscoring the Red Storm 17-4. The offensive barrage continued in the second half, as the team’s senior leaders stepped up on the big stage.

Senior guard Emily Hiltunen poured in a game-high 23 pts. and hit five long-range three-pointers. Every time it seemed that St. John’s would make a run, Hiltunen stifled that rally with a three from downtown.

Sophomore Kailey O’Grady was active on the boards, pulling down six rebounds to go along with five pts. Freshman Emily Bosiacki contributed nine pts., five rebounds and three assists off the bench. Both these players received Honorable Mention selection to The Tablet’s All-Star squads.

St. John’s Prep had been playing its best basketball of the season heading into the championship, but Kearney’s offensive and defensive effort helped to “calm the storm.”

“They (Red Storm) just proved themselves to everyone,” Conti said. “They beat Fontbonne, the number one seed, and they just had hard work like us, and it showed.”

Sellitto said that this team has been a special group of girls, and in addition to their basketball talent on the court, it’s been their chemistry that has helped the team succeed.

“Spending so much time together from practices, it’s just like we’re one big family,” Hiltunen said. “We pick each other up when someone’s down. We yell at each other, but that’s what teams do and families do.”

Below is video coverage from NET-TV’s “Currents” of the Tigers’ diocesan championship win: