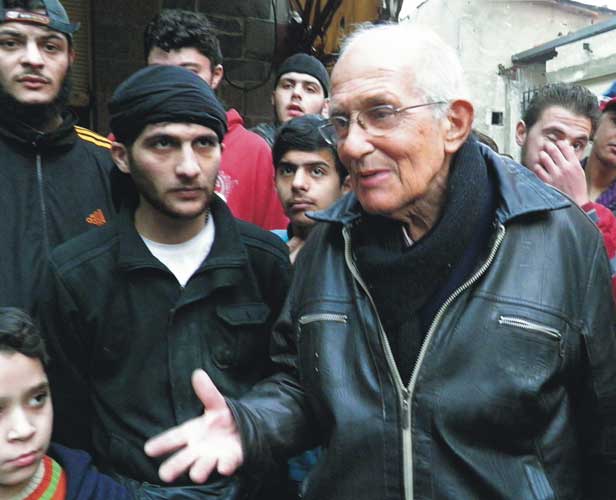 Jesuit Father Frans van der Lugt chats with civilians in early January, urging them to be patient, in the besieged area of Homs, Syria. The Jesuits said April 7 that the Dutch priest, who had worked in Syria since 1966, was beaten by armed men and killed with two bullets to the head.

The 75-year-old Dutch Jesuit refused to leave war-torn Syria, instead staying in Homs to help the poor and homeless. Father van der Lugt became known around the world after appealing for aid for the people of the besieged city of Homs in a video posted on YouTube in late January.

The U.N. supervised an evacuation of about 1,400 people from Homs in early February; arriving in Jordan, the refugees confirmed Father van der Lugt’s accounts of people, especially young children, starving to death. S

peaking to Catholic News Service by telephone Feb. 6, the Jesuit had said: “There has been no food. People are hungry and waiting for help. No injured people have been allowed to leave. Families have been hoping to get out of the siege and out of the fighting between the two sides.”