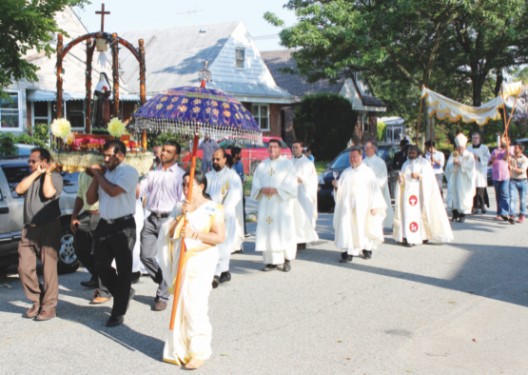 Wearing richly hued attire, hundreds of Queens residents walked through the streets of North Floral Park to celebrate the life and intercessory works of St. Alphonsa on a recent Sunday afternoon.

Accompanied by the rhythmic beat of drums and cymbals, along with the prayers of a multicultural assembly, four men bore a statue of the saint on their shoulders as Auxiliary Bishop Raymond Chappetto carried a relic in procession.

“We are happy to have our own saint,” Geetha Joseph told a visitor as she walked amid family and friends.

Festivities began with a 4 p.m. concelebrated Mass at Our Lady of the Snows Church, which has honored the Indian saint’s feast with increasing fervor since 2010. After the Mass and procession, attendees were able to venerate first-class relics of the saint and sample Indian fare.

“You know what’s so beautiful? Everybody comes out for this,” said Father Kevin F. McBrien, pastor, who noted that this annual feast is one of the biggest at the parish. Most impressive, he said, is that this devotion attracts not only Indians, but also Filipinos, Irish and Italians.

This year’s celebration also drew former pastor, Bishop Chappetto, who was the main celebrant at Mass, and a special homilist, Bishop Thomas Mar Eusebius of the Syro-Malankara Exarchate in the U.S.

Our Lady of the Snows is home to members of the Syro Malankara and Syro Malabar churches, Eastern Catholic rites in full communion with Rome, as well as the Indian Latin rite, coordinated in the diocese by Father Robert Ambalathingal. The parish offers a Latin-rite Malayalam Mass on the second Saturday of every month.

Canonized on Oct. 12, 2008, St. Alphonsa is the first female saint of Indian origin and the first saint of the Syro Malabar Church.

“We come today to honor her memory, to seek her intercession and to think about the virtues and gifts God gave to her,” Bishop Chappetto told the crowded church.

A 20th century religious sister from Kerala, India, St. Alphonsa is known for living a short life characterized by great suffering, which she considered a gift from God.

Born Anna Muttathupadathu on Aug. 19, 1910, she endured a difficult childhood before joining the Franciscan Clarist Sisters in May, 1927, and taking the name Alphonsa of the Immaculate Conception in honor of St. Alphonsus Liguori. Her life was marked by illness and pain, including an accident which burnt her feet, leaving her permanently disabled, until her death at age 35 on July 28, 1946. Her feast day is observed July 28.

St. Alphonsa was honored with a procession and Mass at Our Lady of the Snows Church, North Floral Park.

Women play cymbals and men play drums in honor of the Indian saint.

Auxiliary Bishop Raymond Chappetto carries a relic of the saint in procession.

Devotees kneel as they raise hymns and prayers of intercession and thanksgiving.

“What made her life exceptional,” Bishop Mar Eusebius said, “was not so much the quantity of her suffering, but the faith and dignity with which she embraced the suffering.”

Accepting suffering and offering it to the Lord in love is countercultural in today’s world, he noted, where people go out of their way to avoid any kind of pain.

“Suffering is the price that we pay for love; love and suffering are two sides of the same coin. “This is the great message St. Alphonsa gives us,” Bishop Mar Thomas said. “We cannot remove suffering from our lives, but … we can change our attitudes.”

Mary Beth Gonzalez participated in the parish novena to the saint for the first time this year and says she’s inspired by the saint’s simple approach to life.

“Her (St. Alphonsa’s) message is that we must do God’s will, not our own.

“When you do God’s will, it leads to the peace and happiness He promises us,” she explained.

Bishop Mar Eusebius noted that while the primary significance of saints is their example of Christian living, they do also intercede for the faithful on earth.

In the case of St. Alphonsa, many miracles have been attributed to her intercession. Reji Babu and her husband Ciby Fernandez count their 16-month-old son Jonathan among those miracles.

After four years of difficulty conceiving, the couple prayed before St. Alphonsa’s shrine in Kerala in 2012. At the saint’s feast day Mass one year later, Father Ambalathingal kept seeing the couple’s faces in his mind. He hoped it was a sign.

“The next month, we were expecting,” Babu said. “It happened so miraculously, I couldn’t help but believe it was her intercession.”

After visiting the saint’s shrine, Philomina George was inspired to bring the devotion to Our Lady of the Snows, but it took some time to win over former pastor Bishop Chappetto, who is now a devotee.

Last summer, he visited the saint’s shrine in Kerala, where he prayed for his former parishioners.
“I prayed for you because it was through you and your love that I was able to develop this love of St. Alphonsa,” the bishop said.

Expressing his hope that the devotion continues to grow, he encouraged those present to spread the word about this “wonderful role model,” and follow her example of faith and courage in the face of their own personal suffering.