School will be back in session soon, and while some will lament over the end of summer, Eileen Harnischfeger isn’t one of them.

The principal of Immaculate Conception School (I.C.S.) is excited to reunite with the students and teachers who, she says, make I.C.S. “the best little school in the heart of Astoria.” 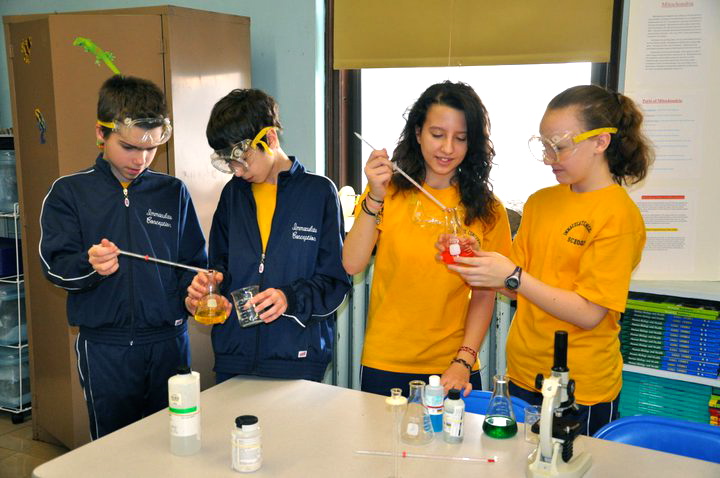 Located on 29th Street and Ditmars Boulevard, I.C.S. is a neighborhood institution, where generations of local Catholics have sent their children since the doors first opened in 1924.

Twelve years ago, Harnischfeger became the first lay principal after having taught kindergarten and computer classes at the school for nearly a decade.

“I really love what I do,” says Harnischfeger – and that enthusiasm has contributed to a steady enrollment of 275 students from various ethnic backgrounds, a stable faculty and overall growth throughout this learning community.

Providing every child with a safe and nurturing environment that facilitates a love of learning as well as a love for God, others and self is the mission of the school. That begins with a solid academic foundation in nursery through grade eight, with daily religious instruction and weekly computer, art, music and gym classes. 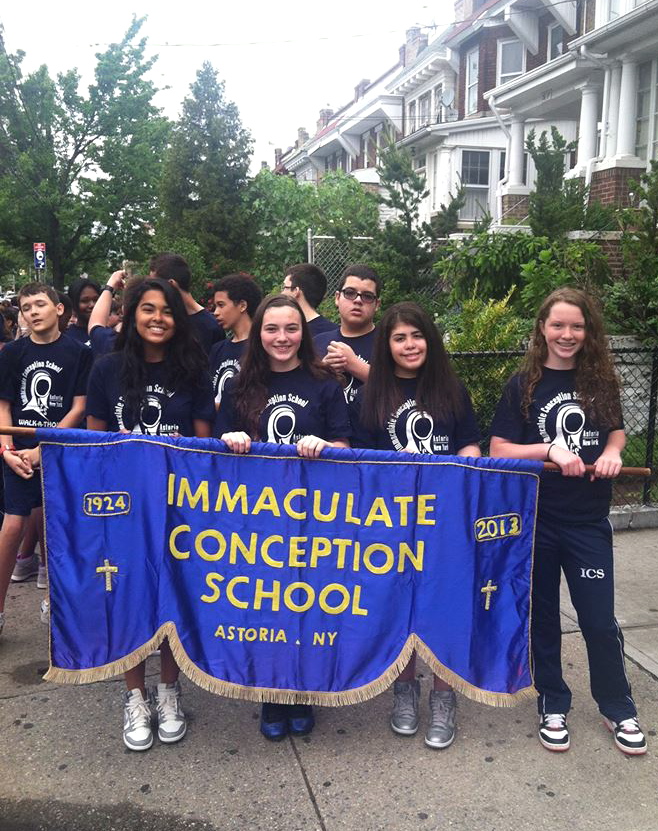 Classes are taught by a mix of seasoned professionals with a “wealth of experience” and recent college graduates who bring “a new perspective,” Harnischfeger said.

In accordance with current changes in academic standards across the nation, the school has begun and will continue implementing the new Common Core Learning Standards this fall.

The common core is designed to honor students’ various learning styles and paces while teaching them “to analyze, be critical thinkers and proficient writers,” according to Harnischfeger. She and four teachers are being trained in the new norms at St. John’s University, Jamaica, this summer.

Teachers are also preparing to introduce two programs that complement the updated guidelines: the SuperKids Reading Program for kindergarten, first and second graders to develop reading and language arts skills; and the Prentice Hall Mathematics: Courses 1, 2 and 3 Common Core Edition to build mathematical proficiency among sixth, seventh and eighth graders.

Differentiated instruction methods better meet each child’s unique needs, Harnischfeger says, and I.C.S. has been doing those techniques way before the common core. For students with delayed skills, learning difficulties and autism spectrum disorders, the school has Title I reading, math and guidance counseling as well as special education support services. 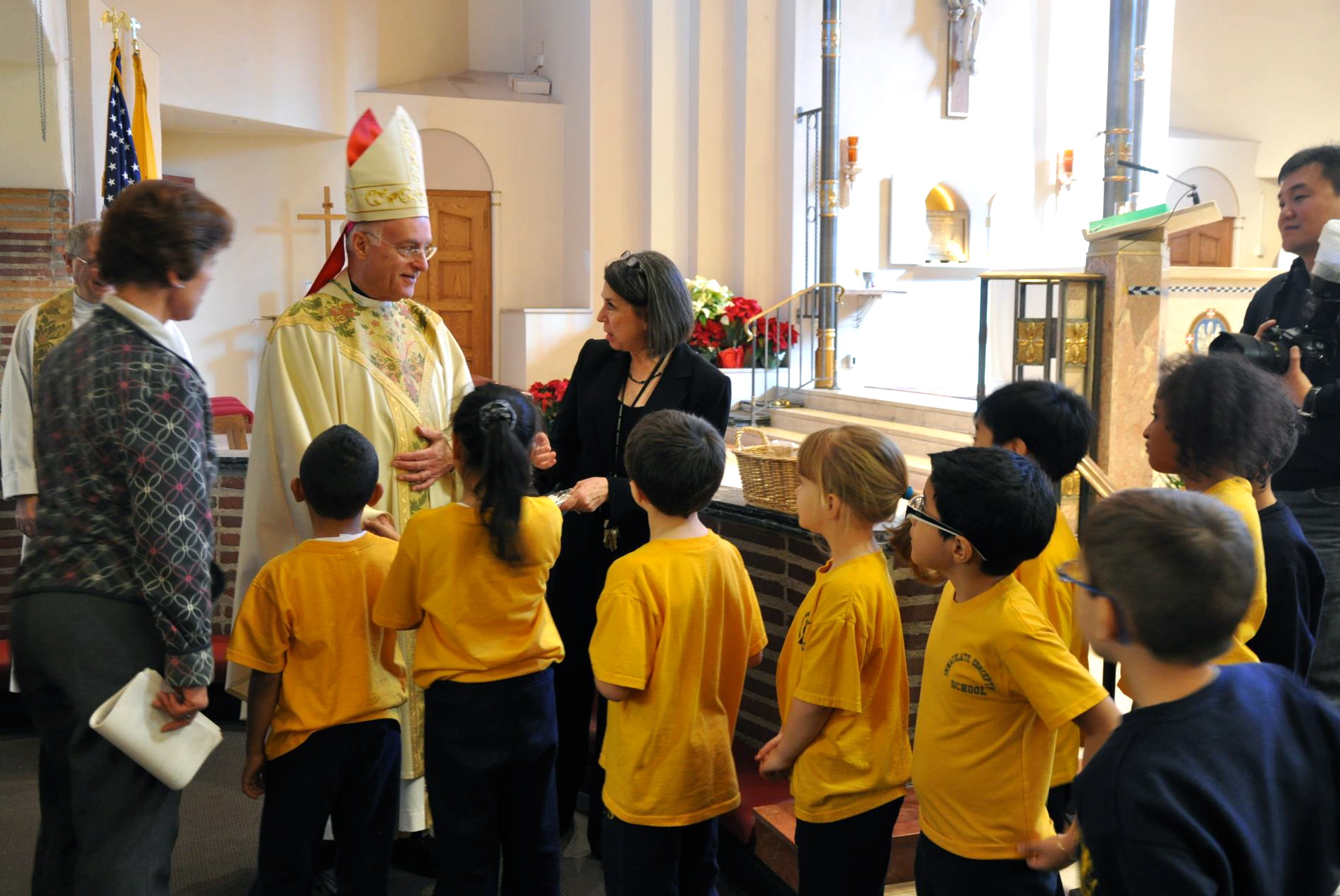 Teachers enhance class lessons and meet students’ visual, auditory, social and communication needs using SMARTBoard technology, which is available in every classroom, and a SMART Table in the nursery classroom. Educators additionally make use of a computer lab, wireless laptop lab and Internet access throughout the building.

Although much has changed since the school was founded 89 years ago, what remains consistent are the Catholic teachings and values that are instilled in I.C.S. students.

Nearly 85 percent of the student body is Catholic these days, and children are formed in the faith through daily instruction, sacrament preparation, monthly liturgies and classroom visits from parish priests. Msgr. Fernando Ferrarese, pastor, even conducts a faith and film program for the upper grades.

One way the school community puts its faith into action is through a monthly Dress Down for Charity day. Children pay $2 for the privilege of not wearing their uniforms for the day, and all proceeds go to a charitable organization. 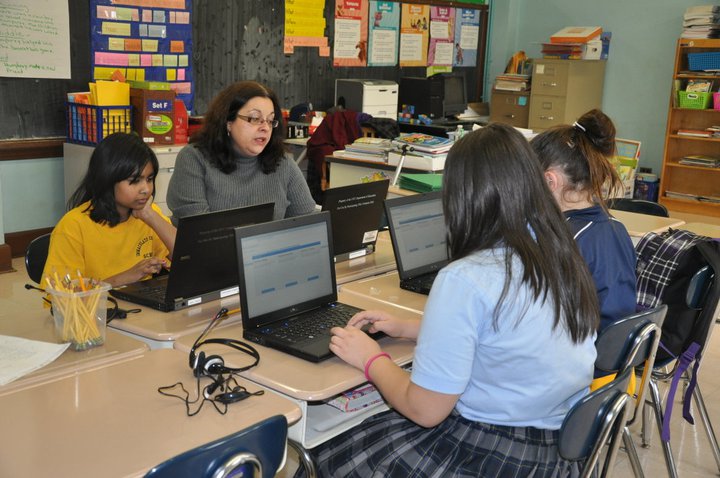 While they have donated to various causes, including animal care, none have garnered as much support as Hurricane Sandy relief efforts. Following the superstorm, the school held a weeklong Dress Down for Charity, collecting over $5,000, which was donated to Catholic Charities Brooklyn and Queens for storm victims.

Lessons in Christian charity are not soon forgotten among students – or alumni, who host an annual auction to benefit the school. Harnischfeger is particularly grateful to alumnus Joseph McCann, who donated a new gymnasium floor to the school two years ago.

“Because of his (McCann) gift,” she said, “we not only have a new gym floor, we have a new CYO program. We have CYO basketball for boys and girls and a CYO volleyball team. He’s really helped to bring sports back to the school.”

And speaking of going back to school, Harnischfeger is anxiously counting the days, and she hopes her students are too.