Continuing to engage the young people of Long Island City and Astoria with positive programming during evenings and weekends, Hour Children’s teen program, known as Hour Teen Scene, recently painted a mural at its residence on 12th Street between 36th and 37th avenues in Ravenswood.

The mural measures 77-by-5 feet and was painted on a wall outside St. Rita’s Convent, known as “My Mother’s House,” where it can be viewed and enjoyed by local residents and visitors to the community. It was designed by the teens to reflect how they’ve been impacted by the incarceration of their mothers. A Kickstarter campaign helped the young people raise over $5,000 to purchase materials and supplies.

“The mural pays homage to the core values and services of Hour Children, as voiced by the young people served by its teen program,” said Little, who volunteered his time to direct the project.

“The base structure of the design is a bridge, symbolizing the Ed Koch Bridge that leads into Long Island City and also ‘the bridge’ that Hour Children creates between incarcerated mothers and their children. Using images, words and symbols, we have created a mural to beautify the community and inspire both current and future residents of ‘My Mother’s House.’” 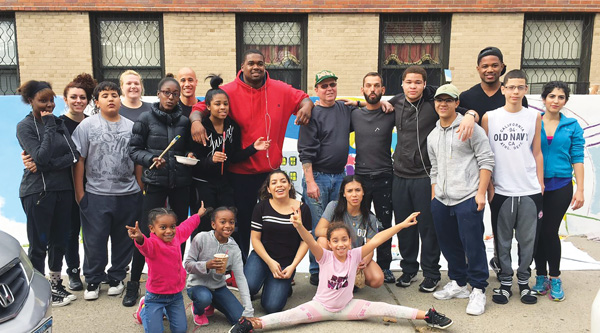 2 thoughts on “Hour Teens Connect to their Community Through Art”