Our nation’s armed forces already do so much to honor and serve this country. However, one group of Army soldiers is taking their service one step further.

Johnny Laursen and the Fort Drum Mountaineers – an ice hockey team made up of soldiers stationed 30 miles from Canada at Fort Drum, N.Y. – have raised over $3,000 for various charities, though they are still a relatively new entity.

Laursen, a Catholic born in Staten Island and raised in Brick Township, N.J., is ranked as a specialist in the 2nd Battalion of the 14th Infantry Regiment of the U.S. Army 10th Mountain Division (hence the team name “Mountaineers”).

He was born a hockey fan and actually attended his first New York Rangers game before he could walk. He started playing hockey at age three and continued through local youth leagues and high school in New Jersey.

Laursen has fond memories of visiting Brooklyn as a child. His grandmother lived in Canarsie, so Laursen always visited the borough for holidays and family gatherings.

His father was a Port Authority police officer, and his uncle served in the NYPD. Additionally, one of his grandfathers was part of the initial “D-Day” ambush, while his other grandfather fought in the Korean War.

“Every male in my family wore some kind of uniform,” said Laursen. “It just came upon me that it was my time to do something.”

Upon joining the U.S. Army, Laursen’s first tour of duty was Operation Iraqi Freedom. He spent almost a year (October 2009-August 2010) in Iraq. He will be heading to Afghanistan in 2013 as well.

But when he returned from Iraq and was assigned to Fort Drum, he happened upon a crumpled up hockey team flier in the library one night. The Mountaineers had formed while Laursen had been deployed and had only been in existence six months before Laursen joined.

At first, the Mountaineers scrimmaged every Monday night against the 1000 Island Privateers, a Federal Hockey League team located in Alexandria Bay, N.Y.

But once he realized the dedication that his fellow soldiers showed toward the team, Laursen made the next move.

“It came to me that we could do something with this,” he said. “We have some big potential here. There’s no reason not to use it.”

Laursen quickly was named an assistant captain of the team and put in charge of organizing games and charitable events. His teammates have responded well to his efforts to support a greater cause.

“Everything my team does and gets involved with is for charity,” Laursen said.

The Mountaineers are an unfunded team and do not take any pay cuts out of the money they raise for charity. In fact, the players reach into their own pockets to schedule rink time, which solidifies the passion they have for their favorite sport.

“We’re out there having fun and doing it for a good cause,” said Laursen. “You can’t beat that.”

The Mountaineers have supported the Wounded Warrior Project, which aids injured soldiers, and the United Service Organizations, which provides morale, welfare and recreational services to military personnel.

Laursen is currently busy reaching out to local teams – many of which are local fire and police departments – to schedule charity games. The team played the Philadelphia Police Department over the summer in Syracuse, N.Y.

He admits that scheduling games is tough since it’s hard for the soldiers to take off work. Many soldiers work 24-hour shifts, so even finding time to head down to the hockey rink for practice is difficult. Mix in the hours of mandatory physical training, and it’s safe to say that Laursen is a busy man. Some nights, he plays hockey until 11 p.m. even though he has a scheduled training test at 5 a.m. the next morning.

The Mountaineers will square off in a charity game against the Syracuse Crunch – the American Hockey League affiliate of the Anaheim Ducks – in early December. The game will benefit “Defending the Blue Line,” an organization that provides hockey equipment to children of lower ranking military families.

Laursen’s contributions to his team and his passion for hockey can be summed up in his following quote: “I play to play.  I skate to skate.  I don’t make a million bucks a year! I just love the game of hockey.”

Laursen and his teammates will continue putting their talents to good use as they spread the word of the Mountaineers’ mission.

Founded in 1998, “Winning Beyond Winning” seeks to provide programs for young athletes to teach them the dangers of drug and alcohol abuse while promoting participation in sports. It also aids in the development of a young athlete’s career after his or her playing career is over.

Hodges celebrated her birthday and shared her thoughts about 2012 hopefully being the year that her late husband, Gil, is inducted into baseball’s Hall of Fame. Gil has been listed on the Veteran’s Committee ballot.

“It’s always a pleasure to see Joan,” said Kranepool, a member of the 1969 World Series Champion New York Mets — managed by Gil. “She’s been a great supporter of baseball for so many years. This is a great cause, and I’m glad she’s part of it.”[hr] 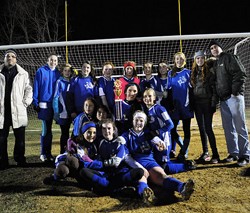