Eleven years ago, Tara Muldoon danced in her big sister’s shadow at the Great Irish Fair. This year, she will follow in her sister’s footsteps as the Colleen Queen of the 33rd annual fair.

“It’s such an honor,” Muldoon shared on a recent afternoon. “I remember when she (Kimberly) was the Colleen Queen. She was an icon for the entire fair. As a kid, I thought it was so cool.”

And now, her time has come to proudly wear a sash bearing the colors of the Irish flag and don a jeweled tiara as she smiles and waves to thousands who will pass through the fairgrounds.

This title, she admits, came as a total surprise – and an affirmation from above.

“I’ve been thinking about my grandmother recently and I took this (honor) as a sign that she’s watching over me,” she said. “No doubt in my mind.” 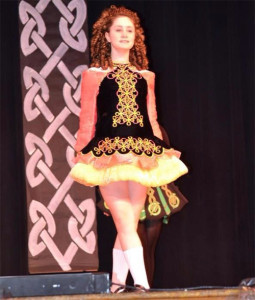 And there is no doubt that her late grandmother, Ann Healion, would be proud. Healion was known for her dedication to the Irish-American community and service in the Ladies Ancient Order of Hibernians (LAOH). She was the past president of Kings County and the N.Y.S. LAOH.

Longtime Dancer
A member of the O’Malley Irish Dance Academy since age five, Muldoon loved to tie on her ghillies and perform for her grandmother.

“I’d dance, and she’d clap along and encourage me,” she said.

Raised in St. Mark parish in Sheepshead Bay, Brooklyn, Muldoon is the youngest of five children born to Mary Frances and Michael Muldoon. She has four older siblings: Kimberly, Laura, Michael and Catherine.

She is a proud product of Catholic education, beginning in nursery school at St. Mark School. She went onto Fontbonne Hall Academy, Bay Ridge, where she was a member of the varsity swim team for four years and joined Lifestream, a service society. She graduated in May.

“Catholic education has had an incredible impact on me,” she said, from the foundation she received at St. Mark’s to the formation she underwent on the secondary level.

“At Fontbonne, I think I became a stronger, more independent woman,” said Muldoon, who strives to be a good role model for her 6-month-old goddaughter Frances.

Charitable Heart
Beauty, faith, talent, knowledge, strength and independence ­– but this list of attributes is not complete without adding that this year’s Colleen Queen also has a charitable heart.

Over the last four years, she has taken part in Swim Across America’s “Making Waves to Fight Cancer” campaign to help raise funds and awareness for cancer research. She’s raised $5,000 by swimming in memory of her grandparents and loved ones who have succumbed to cancer.

Muldoon’s focus has understandably grown narrower in recent days as she has begun a new adventure – college. She’s attending the State University of New York at Oneonta, in upstate New York, where she is majoring in criminal justice.

“I’ve always been a big believer in justice,” she said. “That comes from my parents. They’ve taught me to be a good person and enriched me in my faith.”

Her faith and values will serve her long and well wherever life’s journey takes her – though she does have one destination in mind.

Land of Her Ancestors
“One of my dreams is to see Ireland,” said Muldoon, who grew up listening to Irish music and embracing the traditions of her ancestors.

She traces her maternal roots to Wexford and Cork, while her father’s family hails from Northern Ireland.

“I truly feel lucky and blessed to be part of such an amazing heritage,” she said.