St. Mel Church honored a beloved parish priest in anticipation of his 50th anniversary of ordination. Clergy and parishioners celebrated the golden jubilee of Father Italo “Al” Barozzi, who is in residence at the Flushing parish, during the 5 p.m. Mass on Dec. 12. A festive reception followed in the parish hall.

A native of Roverto in Trent, Italy, Father Barozzi was ordained Dec. 18, 1965 in Turin for the Consolata Society for Foreign Missions. He attended seminaries in Milan and Turin as well as Duquesne University, Pittsburgh, Pa., and Colombia University, Manhattan, prior to ordination.

Incardinated as a priest of the Brooklyn Diocese in 1989, he has served as an assistant at Our Lady of Mount Carmel, Williamsburg; St. Brigid, Bushwick; St. Joseph, Astoria; St. Aloysius, Ridgewood; St. Dominic, Bensonhurst; and Our Lady of the Miraculous Medal, Ridgewood. Since 2007, he has been part of the parish family at St. Mel, where he is active with the Italian-American community.

Above, ladies from St. Mel parish congratulate Father Barozzi. At top left, a black-and-white image of the young priest on his ordination day. Below, Father Barozzi with Father Gerard J. Sauer, St. Mel’s pastor, back row, far left; Father Jun Hee Lee, parochial vicar, back row, right; and the altar boys and girls who served at his jubilee Mass. 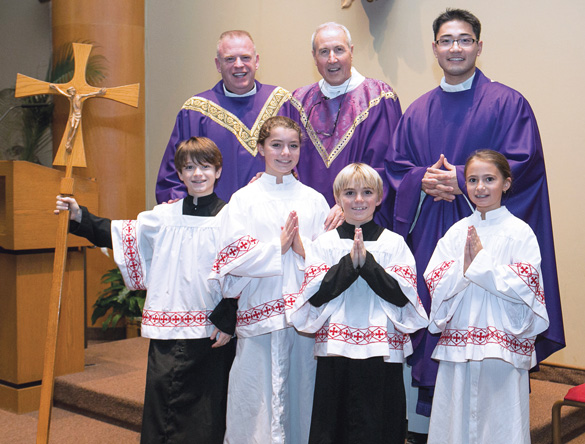