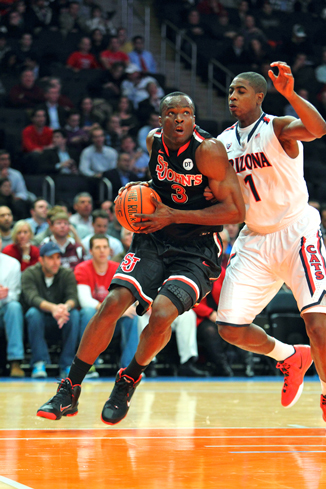 The African nation of Nigeria is located more than 5,250 miles from New York City. However, one young man now calls both places home.

St. John’s University, Jamaica, men’s basketball junior power forward God’sgift Achiuwa was born in Port Harcourt, the capital of River States, Nigeria. Though his hometown has over one million people, adjusting to the Big Apple has certainly been a learning process.

As the third of six children to Eunice and Donatus Achiuwa, God’sgift was considered a “gift from God” by his parents, and they therefore named him accordingly. The members of the family are all devout Catholics, and the parents named each of their children after names or phrases found in the Bible. God’sgift has three brothers – God’swill, Promise and Precious – and two sisters – Grace and Peace.

Though he answers questions daily about the origins of his name, Achiuwa takes all the attention in stride.

“I grew up realizing that my name is God’sgift,” he said.

His teammates call him “Gift” for short. It’s much easier to get his attention that way, especially when he’s running up and down the basketball court.

While basketball is now Achiuwa’s passion, that wasn’t always the case. He only started playing basketball in 2004.

“I played soccer my entire life,” he said. “In Nigeria, every kid plays soccer. It’s a traditional sport.”

But as he started getting taller, the local basketball coach encouraged him to take up that sport instead. Once he started playing basketball, he absolutely loved it and hasn’t stopped playing since.

At six-feet eight-inches tall with an 87-inch wingspan, Achiuwa has an athletic frame built for basketball. Alex Nwora, the head coach of Erie Community College, Buffalo, discovered God’sgift at a summer basketball camp in Nigeria. Nwora is also a native of Nigeria and runs the camp annually.

Without ever visiting the U.S., Achiuwa accepted an offer to play basketball at Erie. He came to the states in late September 2009 eager to begin his basketball career.

Of the all the immediate culture shock he experienced, the weather conditions most affected him. Port Harcourt is situated in southern Nigeria – just north of the Equator – so he was constantly cold upon moving to Buffalo.

“The people and culture over here are different from what I experienced in Nigeria and grew up with,” Achiuwa said. “Literally, I had to adjust to everything coming to the states.”

Once he got settled, however, God’sgift came into his own. He spent two seasons at Erie, and he was named the National Junior College Athletic Association Region III Player of the Year for the 2010-2011 season. He averaged 22.3 pts. (ninth in the country), 11.7 rebounds (10th) and 2.2 blocked shots (17th) per game en route to being named a junior college All-American.

In addition to his unique name, these statistics sparked the interest of countless colleges across the country. Achiuwa was at first overwhelmed about the decision before him, but he weighed all his options equally. As an academic junior, he would only have two more years of NCAA eligibility, so he had to choose a school that would meet his athletic, academic and religious needs.

Donatus Achiuwa, God’sgift’s father, is a pastor, so he believed his son would excel at a Catholic institution. God’sgift’s family played an integral role in his final choice.

“I told them (his parents) St. John’s is a Catholic school,” God’sgift said. “That really caught my dad’s interest.”

Achiuwa was also intrigued by the winning tradition of the new St. John’s coaching staff led by Head Coach Steve Lavin. With Achiuwa, Erie’s record was 55-6 in two years, so God’sgift wanted to ensure he would still be able to win. In April 2011, he signed with the Red Storm as part of the No. 3 ranked recruiting class in the nation behind only the University of Kentucky and Duke University – perennial college basketball powerhouses.

In his short tenure with the Johnnies, Achiuwa’s game has improved drastically. The school’s trainers helped him build muscle in the offseason so that he now has an even more athletic frame than he had at Erie.

“I really think I’ve gotten better since I came here to St. John’s,” he said.

These improvements have helped Achiuwa play at a higher level. The Big East Conference of the NCAA’s Division I is much different than junior college basketball. Achiuwa noted that the talent level is much higher, which makes the games more competitive.

Though the hype back in April was all about the name “God’sgift,” Achiuwa has quickly shown that he is more than just a name. He’s earned a starting role with St. John’s and has averaged 11.1 pts. and 6.4 rebounds per game.

“Gift is a talented frontline player who possesses tremendous size, strength, speed and skill,” said Lavin. “He is an ideal fit for our baseline-to-baseline attacking style of play.”

Despite his success on the court, God’sgift has not forgotten his religious background. He attends weekly Mass on campus with his teammates, and he said that his role model is Jesus Christ.

“He (Jesus) was sent by God to die for us,” Achiuwa said. “If someone can give His life for me, I think I should follow His footsteps to do whatever I can to help others.”

The Red Storm will be in the midst of its Big East Conference schedule over the next few weeks and will look to Achiuwa to continue his strong play on the glass.

“All I’m trying to do here at St. John’s is help my team win,” he said. “That’s what I’ve been doing since the season started.”

With help from both God and God’sgift, the Johnnies will attempt to earn a second consecutive trip to the NCAA Tournament in March.