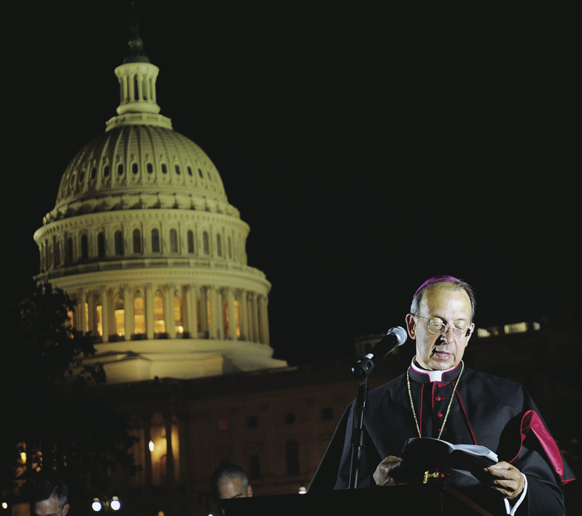 The cardinal, president of the U.S. Conference of Catholic Bishops, said the 110-page ruling is “long and complex,” and the bishops will “provide a fuller statement when that analysis is complete.”

The HHS final ruling updates proposed rules the department had issued in February. It had left the rules open for comment through April and received more than 400,000 comments.

Cardinal Dolan said June 28 that he appreciated the “five-month extension on implementing the complex proposal,” meaning the government extended its “safe harbor” period to Jan. 1, 2014, protecting employers from immediate government action against them if they fail to comply with the mandate. Before the final rules were released, that period was to end Aug. 1 of this year.

The administration’s final rules also include a separate accommodation for nonprofit religious organizations – including charities, hospitals and universities – that will not have to “contract, arrange, pay, or refer for contraceptive coverage” that they object to on religious grounds.

To qualify for the accommodation, organizations must be certified as nonprofit religious group with religious objections to contraceptive coverage. These organizations must provide their health insurance companies with proof of their self-certification, and insurance companies in turn would notify women in the health plan that contraceptive coverage would be provided separately and at no cost to them.

More of the Same

The Becket Fund, a non-profit, public interest law firm that has represented Catholic and other religious institutions in a number of the lawsuits against the HHS mandate, said the new ruling is not much different from the proposed rules the HHS issued in February.

“The news about the final rule is pretty simple: It’s more of the same,” said Eric Rassbach, deputy general counsel for the Becket Fund for Religious Liberty.

In a telephone news conference June 28, Rassbach told reporters that the HHS final rule “is not very different from the inadequate rule” the HHS issued in February and updated after the 60-day comment period. He said that although “HHS tinkered with some aspects of the rule,” the agency failed to tackle “fundamental religious questions.”

“Essentially, we’re where we’ve been all along; the change now is it is final,” he said, adding that unresolved issues will have to be addressed by the courts.

He took issue with the fact that religious groups with a self-insured plan must still provide notice to the third-party administrator of their plan that they object to paying for coverage of abortifacients and contraceptives, and then the third party must provide the coverage. He also objected that the final rules still do not exempt businesses whose owners, because of their religious beliefs, are morally opposed to the mandate, so they will still be required to provide the coverage or pay up to millions of dollars in fines.

A statement by the Becket Fund said an “easy way to resolve this would have been to exempt sincere religious employers completely, as the Constitution requires.”

In February, HHS said that in order to clarify what kinds of organizations may qualify for the exemption, it was eliminating the first three prongs of its original four-pronged definition of qualifying religious organizations and clarifying the application of the fourth prong, which stated that an exempt entity would be a non-profit organization under specific sections of the Internal Revenue Code.

HHS said June 28 that in its final rules it is giving “a simpler definition of ‘religious employer’ for purposes of the exemption from the contraceptive coverage requirement in response to concerns raised by some religious organizations. These employers, primarily houses of worship, may exclude contraceptive coverage from their health plans for their employees and their dependents.”

In an HHS telephone news conference, Michael Hash, director of the Office of Health Reform for HHS, said the final rules simplify and clarify the definition of religious employers and make it clear that they don’t have to “refrain from providing services,” such as charity-related work, that they typically do.

He also said the way these contraceptive services will be delivered “insulates the providing organization,” referring to a change in the finalized rules that outlines how insurance companies will reimburse nonprofit religious organizations, including religious hospitals or universities, that object to contraceptive coverage.

In the rules, HHS acknowledged it had received many comments urging the agency to extend the exemption to include nonprofit secular employers and for-profit employees with religious objections to providing contraceptives. The mandate does not include a conscience clause for employers who object to such coverage on moral grounds.

But HHS said it “declined to adopt” the suggestion to widen its exemption for secular employers who object to the mandate on moral grounds.