In life, all we can ask for in any sort of venture is a fair opportunity. It is then up to us whether or not we give it our all to succeed.

For Danny Abramowicz, all he needed was his fair chance. The former New Orleans Saints’ wide receiver may not have been the biggest, strongest or fastest player, but once he received a fair shot, he turned in a successful eight-year NFL career.

And through it all, he’s relied on Jesus Christ for guiding him through some tough times and for helping him establish his most recent endeavor: co-hosting the television program “Crossing the Goal” on the Eternal Word Television Network (EWTN).

Fittingly, the former “Saint” is using his God-given platform to act as a modern-day saint by evangelizing through his television program.

Abramowicz, 68, was born and raised in Steubenville, Ohio, where he served as an altar boy at St. Peter’s Church. When he wasn’t at church, he was constantly playing sports with his good friend Rich Donnelly, the current manager of the Brooklyn Cyclones. 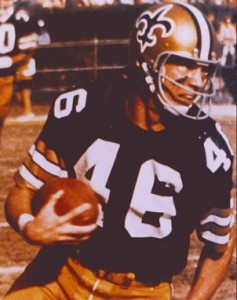 Xavier University, Cincinnati, Ohio, was the only school to offer Abramowicz a football scholarship, since he was deemed as too small and too slow to play the wide receiver position.

In 1967, the New Orleans Saints had formed as an expansion team, and in the team’s first-ever draft, Abramowicz was selected No. 420 out of 445 picks in the 17th and final round of the NFL Draft. He said being picked that low motivated him to prove the naysayers wrong.

“Back in my upbringing, my dad and Rich’s dad told us, ‘You never quit. You don’t listen to people who tell you that you can’t do it,’” Abramowicz said. “The word ‘can’t’ … I never can remember that in my life growing up. You just didn’t even say it. Then when I got drafted that low, I said to myself, ‘I’m going to show them. They might look at my size or my speed, but they can’t look at a person’s heart.’”

Abramowicz’s heart was what helped him get noticed. He was one of 18 receivers in training camp that year for the Saints, but he demanded that he be given a fair shot to prove himself. Through the first three preseason games, he only saw action on special teams, and he was then summoned to head coach Tom Fears’ office and told to bring his playbook – which means a player has been cut.

“That’s usually a bad sign when you get a knock at your door, but when my door knocked, I didn’t bring the playbook,” Abramowicz said. “I went to see coach, and I walked in and I told him ‘You didn’t give me a fair chance, you said you’d give me a chance.’ He (Fears) said, ‘You’re serious?’ I said, ‘I’m as serious as I could be.’”

Fears agreed to start Abramowicz in the next game, and the receiver who was apparently too small and too slow went out and caught six passes, which led to him making the Saints’ roster. But even so, through the team’s first six regular season games, he only played on special teams.

However, when he finally got his chance when a starter got hurt, Abramowicz had a huge game, catching 12 passes for 156 yds. For the next seven seasons, he only missed one game.

“I knew I wasn’t going to have many chances, so I better make the best of this,” Abramowicz said. “My dad always told me that when you get your chance, you always have to take advantage of it.”

For his career, he caught 369 passes for 5,686 yds. and 39 touchdowns. He set a then-NFL record by catching at least one pass in 105 consecutive games, and nearly 40 years after his retirement, he’s still fourth on the Saints’ all-time list in receptions, receiving yardage and touchdowns. Not bad for a player that nobody else wanted in 1967.

Even ‘Saints’ Have Demons

Abramowicz remained a practicing Catholic throughout his football career, but he admitted that the fame went straight to his head. Even though he had a family – wife Claudia and children Danny, Andrew and Stephanie – he succumbed to the party atmosphere associated with New Orleans and playing a professional sport. His demon was alcohol.

“I was out there like the fair-haired boy for the Saints and not living the standards of life,” Abramowicz said.

His alcohol abuse wound up getting out of hand and putting pressure on his marriage. Finally, he sought help.

In 1981, he began attending Alcoholics Anonymous meetings, and he approached the program with as much tenacity as he did his NFL career. Though he became sober, he said that he still felt a longing for something more – he was “sober not serene,” as he called it.

He was invited to attend one of the Catholic Charismatic Renewal’s Life in the Spirit seminars. He learned how to allow the Holy Spirit into his life, and Jesus Christ became his No. 1 priority.

Once he re-committed himself to his faith, Abramowicz started a weekly men’s prayer group in his home, which he called “Monday Night Disciples.” Twelve men attended the first meeting, but as the months progressed, the attendance grew to 30, 50 and even 90 members each week. 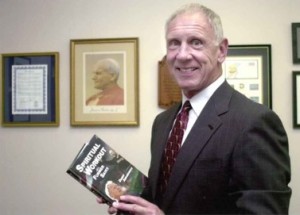 Seeing how the “Monday Night Disciples” group took off and the success of his 2004 book “Spiritual Workout of a Former Saint,” Abramowicz took his evangelization efforts a step further. In September, 2008, EWTN launched the show “Crossing the Goal,” which encourages men to get into spiritual shape. Abramowicz is the president and founder of Crossing the Goal Ministries.

The show, which airs new episodes every Sunday evening at 6:30 p.m., utilizes a platform that men understand – sports – to convey a spiritual message.

“So many people are not going to Mass, especially men, so I said, ‘How can we reach these guys?’ So we put together ‘Crossing the Goal,’ and we made it look like SportsCenter,” Abramowicz said.

Together with co-hosts Peter Herbeck, vice president of Renewal Ministries; Curtis Martin, founder of the Fellowship of Catholic University Students; and professional broadcaster Brian Patrick, Abramowicz challenges men to examine their lives and their faith. He said men will respond to being challenged.

His team speaks at Catholic men’s conferences throughout the country. God gave him a platform, and he’s using his talents in a positive way.

“God wanted me to be successful in football, not for my glory but for His glory, because He had a bigger plan for me,” Abramowicz said. “The plan was for me to do what I’m doing now. Men listen to me because of my background.”

Though he spent the bulk of his life catching passes, he’s now the one doing the “passing,” as he passes on his experiences to guide Catholic men.

“To this day, he’s (Abramowicz) my idol,” Coach Donnelly said. “We talked all the time about our dream to play professional sports, and we were not going to let anything stop it. Danny was my hero and still is.”