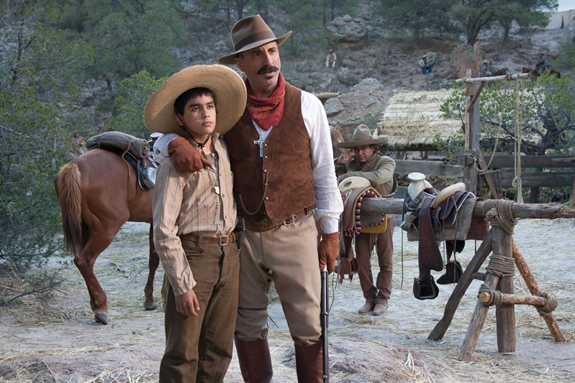 “For Greater Glory,” the new film about Mexico’s repression of the Catholic Church in the 1920s, couldn’t have come at a better time.

The film, which is in limited engagement at three theaters in Manhattan, tells the story of the little-known or easily forgotten tyrannical moves against religious liberty by President Plutoarco Calles, Reuben Blades.

When the government outlaws religious orders, deprives the church of property rights and strips the clergy of civil liberties, including their right of trial by jury and the right to vote, a group of fervent Catholics, that became known as the Cristeros, unleash a violent response.  The movie is packed with action scenes and can be quite violent at times, but the depiction recalls a reality that should not be dismissed.

The central figure of the film is Gen. Enrique Gorostieta, played by Andy Garcia, a former military general and religious skeptic, who is hired to unite the religious forces as they wage war against the Federales.

The movie is stolen by young actor Mauricio Kuri, who portrays Joe Luis Sanchez, the saintly teen who refuses to renege on his faith and suffers a vicious martyrdom as a consequence.  Sanchez, along with several other Mexican martyrs of the time, was later beatified for his heroism.

Cameo appearances by Eva Longoria and Peter O’Toole lend additional star power to the project, which is beautifully photographed with sweeping vistas and special effects which magnify the power of the battle scenes.

“I may have an issue with the Church, but I support religious liberty,” says Gen. Gorostieta when questioned why he got involved with a religious cause despite his own lack of faith.  And therein lies the timeliness and pointedness of the movie.

At a time when religious liberty is under attack in the United States, it is not far-fetched to see a similar style persecution as a real possibility in America.

Catholic News Service reviewer John Mulderig made just that point in his critique: “The Mexican government’s tyrannical interference with religious liberty, while obviously far more extreme than anything taking place north of the border today, nonetheless carries a sobering resonance with current events. If the film can be taken as a cautionary tale about where excessively zealous, overweening secularism can lead a nation, the warning is a stark one.”

“For Greater Glory” is a film for our times.  It should be seen by all Catholics, indeed all people of faith.  It’s uplifting to view a movie that centers around the rallying cry of “Viva Cristo Rey!”  “Long Live Christ the King!”

So often we Catholics complain that there is nothing on the big screen that speaks to our values.  “For Greater Glory” is proof that filmmakers can treat serious topics such as faith and institutional religion in a serious way while still teaching valuable lessons.

This is a first-rate movie that demands Catholics’ support at the box office.  We’ve asked for something worthwhile and it has been delivered to us.  If we don’t support faith-based films such as “For Greater Glory,” we’ll deserve what we get in the future.  The same can be said if we fail to understand its message.