Many members of the Filipino community in the U.S. belong to helping professions, such as the medical field. But right now, it is the Filipinos themselves who are in need of help.

That was the observation of Father Patrick Longalong, coordinator of the diocesan Filipino apostolate, following a Mass of healing and hope Nov. 17 at St. Michael’s Church, Flushing. The liturgy served as a source of consolation for those who have been responding to the devastation caused to their homeland by Typhoon Yolanda.

“We pray for our brothers and sisters in need,” said Auxiliary Bishop Paul Sanchez, the main celebrant and homilist at the Mass. “We pray that God will give them the tremendous grace to rebuild.”

Father Longalong, who has been coordinating relief efforts in the diocese, says that getting the supplies from the airports to the places that have been affected has not been an easy task. But he reports that his contacts on the ground there say that supplies are getting to those in need.

While he stays in touch with his sources through Facebook and Twitter, the priest is still waiting for word about two of his aunts in the Philippines who have not as yet been located.

“I know people who are here and could not make it back to the Philippines to bury their dead,” said Father Longalong. “This Mass is for them and also for those for whom this whole tragedy has been so overwhelming. This liturgy is a spiritual event, not a fundraiser.” 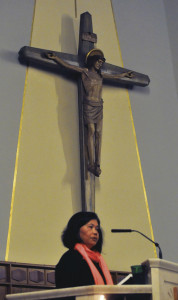 But on Monday morning, the priest, who is of Filipino descent, was back collecting medical goods, sanitary goods and non-perishable food for shipment back to the land of his ancestors.

He pointed out that the rallying point for relief efforts in Queens is at Ascension Church, Elmhurst, where volunteers are on hand to receive donations every day from 9 a.m. to 7 p.m.

The Flushing service was coordinated by Michael Pasion, president of the Filipino Association at St. Michael’s parish. After thanking his pastor, Msgr. Ed Wetterer, for making the church available, he thanked all for being present.

“Your presence in this gathering is a reflection of our faith as a community to come together both in worship and prayer to our God of love. In spite of the tragedy, we believe He will hear our supplications of prayers and at the same time heal our hearts where no one else can.”

He called upon Cardinal Antonio Luis Tagle of Manila “to reach out to the government agencies of the Philippines to bring dignity for a decent burial to our brothers and sisters who lost their lives in this tragedy. The priority to rescue and find human remains should be of utmost necessity to find closure to families and their loved ones left behind.”

Kimberly Lupton of Queens said she has been watching the tragedy unfold on the local Filipino television channel. “They still have bodies in the streets,” she said. “We’re trying to give them all the help we can.”

Bishop Sanchez said that “so many people have told me that their family members have lost all their possessions. They’re so far away, but thanks be to God, they can at least come together and pray. We know that Filipino people have tremendous devotion, and they’re wonderful Catholics.”

“We cultivate the virtue of hope and we encourage them to be united with their loved ones in the suffering through prayer, especially in the Mass,” he said.

“When there is a problem, we gather to pray and to spread the word that people are hurting,” he said. “We try to channel some kind of strength to them.”

“We always pray, whether it’s in joy or sorrow,” said Josie Nova, an adviser from the Brooklyn Council to the Filipino diocesan apostolate. “It’s an uplifting of the soul and spirit.”

“This Mass brings us together,” pointed out Lourdes Agay, past president of the St. Michael’s Association. “It makes us realize that we really are a family.”

Bishop Nicholas DiMarzio has asked all parishes to take up a second collection to assist the rescue efforts in the Philippines. All money collected will be sent to Catholic Relief Services.

The Mass for healing was preceded by an hour-long prayer service that included recitation of the Glorious Mysteries of the Rosary.

Joining Bishop Sanchez and Father Longalong as a concelebrant was Father Peter Gillen, parochial vicar at Our Lady of Guadalupe, Dyker Heights.

Filipinos in Queens were again scheduled to pray together at St. Adalbert’s Church, Elmhurst, on Wednesday, Nov. 20.

Another Mass of healing for the Filipino community in Brooklyn will be celebrated at Holy Family Church, Canarsie, on Saturday, Nov. 23, at 10 a.m.