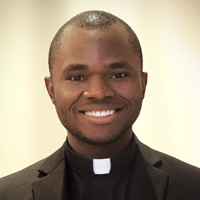 Whatever God places before Nigerian-born Father Uririoghene Melchizedek Okrokoto, 28, he will use it to give God glory. In fact, his first name means “the glory of God.”

A native of Delta State in southern Nigeria, he completed his primary and secondary education at Good Citizens School in Warri, Delta, and Christ the King International School, Lagos, Nigeria.

He and his five siblings immigrated to the U.S. in 2007, joining his parents in Corona, where they attended Our Lady of Sorrows Church. His parents now live in St. Albans and belong to St. Gerard Majella parish, Hollis.

He attended Queensborough Community College and worked as an aide in a nursing home before entering Cathedral Seminary House of Formation, Douglaston, in 2008.

While living at Cathedral Seminary House of Formation, he attended St. John’s University, Jamaica, and received his bachelor’s degree in philosophy.

He continued his studies at St. Joseph’s Seminary, Dunwoodie, where he attained his master of divinity degree, and a bachelor of sacred theology degree through an affiliation with the Pontifical University of St. Thomas Aquinas, Rome.

Father Okrokoto started his life in a rural village with hardly any electricity, where people “get down to the earth, work with their hands, sow and wait for crops to grow.” That gave him an appreciation for the goods he saw as he moved to more developed cities and later the U.S.

“It helped prepare me for whatever situations I would encounter in life because things are not always going to be as you want them to be. You have to be ready to enter a situation and really use whatever God puts in front of you to give glory to God,” he said.

The seeds of his vocation were planted in his childhood village, Orogun, which had no parish but an outstation visited occasionally by a priest. He recalls the excitement among the people when the priest came to celebrate Mass and sacraments.

“I knew there was something special about the priesthood, the importance of the priest to the people,” he said. “That impression has always been there.”

Growing up, he was impressed by the priests he met and the eloquence of their homilies. He wished on some level he could do something like that with his life. But when his Church in Nigeria was looking for young men to join the seminary, he was “a little thankful” he did not have all of the schooling required to enter.

Then one day at Mass, he was touched by the words of Psalm 110:4: “You are a priest forever, a priest like Melchizedek of old.” Having no middle name, he asked his parents if he could choose Melchizedek. It became official when he put it on his U.S. citizenship papers.

When he came to the U.S., he began to feel pressured to not practice his faith by his job, society and the culture. In response, he started going to daily Mass, joined the choir and became a lector.

“If I didn’t take responsibility for my faith, it was going to dwindle away,” he said.

Then one Sunday after Mass, he stayed behind to pray and found himself reciting the words of Bishop Nicholas DiMarzio’s prayer for vocations. He had said the words countless times before, but in that moment, they were different; they were personal.

“The realization came to me that I was not exempt from it. The prayer is not for somebody else; I was included in that prayer too,” he said.

He left church and assured himself that God wanted him to get married and have children.

But when he got home, he picked up his Bible and opened to a passage about the call of the prophet Isaiah.

“Then something amazing happened, God asked the prophet: ‘Whom shall I send? Who will go for us?’ I felt like God was speaking to me and the question was addressed to me. I felt I had to give an answer.”

Humbled by what God might be asking but unsure of what to say, he read on and found the “perfect answer,” repeating the words of the prophet: “Here I Am, Lord. Send me.”

On his path to the priesthood, he has found inspiration in the “great priests” of the Brooklyn Diocese, including Father James Kuroly, who introduced him to Project Andrew; Father Fred Marano, his spiritual director in Douglaston; and Msgr. Thomas Healy, his former pastor, who will vest him at ordination along with Father Christopher O’Connor.

Urhobo is his native tongue, and he speaks both English and Pidgin.

Father Okrokoto will offer his First Mass of thanksgiving at St. Mary’s Church, Woodside, on Sunday, June 5, at 10 a.m.