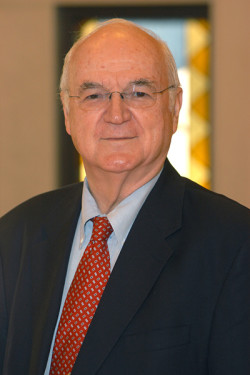 Father Richard McBrien, 78, noted theologian and prolific writer who served on the faculty of Notre Dame University, South Bend, Ind., for almost three decades, died Jan. 25 in his native Connecticut, where he had recently returned. He had been ill for the past several years.

He also wrote a popular theology weekly column which ran in as many as 25 Catholic newspapers in the country, including The Tablet.

Father McBrien, a priest of the Archdiocese of Hartford, Conn., also taught at Boston College and Harvard University before moving to Notre Dame.

Father McBrien served as president of the Catholic Theological Society of America, 1972-74, and won its John Courtney Murray Award “for outstanding and distinguished achievement in theology” in 1976.

In 1985, the Committee on Doctrine of the U.S. bishops’ conference objected that his book Catholicism was “not supportive of the church’s authoritative teaching”on certain matters, especially contraception and the ordination of women.

Despite becoming a lightning rod on theological subjects and having his column removed from several newspapers, Father McBrien always remained a priest in good standing.

One thought on “Father Richard McBrien”