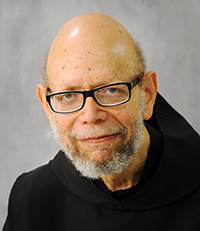 ST. MEINRAD, Ind. (CNS) – A funeral Mass was celebrated May 21 at St. Meinrad Archabbey in St. Meinrad for Benedictine Father Cyprian Davis, who died May 18 at Memorial Hospital in Jasper. He was 84.

Father Davis wrote six books, including “The History of Black Catholics in the United States,” published in 1990. He was working on a revised edition of the book at the time of his death.

He also had also written what is considered the definitive biography of Mother Henriette Delille, the black foundress of the Sisters of the Holy Family in antebellum New Orleans. Her sainthood cause was opened in 1988 and she was declared venerable in 2010.

Born Clarence John Davis Sept. 9, 1930, in Washington, he joined the Catholic Church as a teenager.

He began teaching Church history at St. Meinrad in 1963, and in 2012 became the school’s first professor emeritus.

Father Davis was an archivist of the archabbey. He also belonged to the American Catholic Historical Association and the Society of American Archivists.

He also served as archivist for the National Black Catholic Clergy Caucus, of which in 1968 he was a founding member.